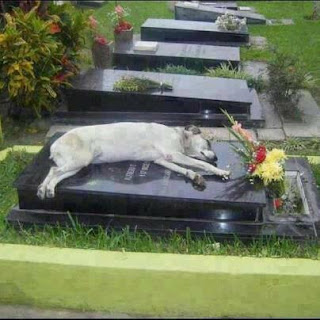 After Miguel Guzman died, his family noticed that Captain, his Labrador, was behaving strangely. The dog would scratch frantically at the door in the evening, and disappear until morning.

The mystery was solved when they followed the dog. Captain had gone to sleep on his master's grave. He's been doing this for seven years. The cemetery doesn't lock the gates until he shows up, and makes sure he's safe through the night.

We read this, and we're not completely surprised. It's a dog, right? And dogs are loyal beyond...

That's the question. Some might say that dogs are loyal beyond reason, and that a human would mourn for awhile, and then move on. But seven years?

For a dog, clearly, Loyalty is worth any price. It's worth dying for; witness the war dogs, police dogs, and family pets that have died protecting their people from attack, or from fire.

And what's harder is that it's worth living for. For Captain, loyalty means living every day with the memory of his master kept bright, and his master's remains kept close.

Dogs understand death. I've had dogs for over forty years, and when one of the pack dies, the others know it. They visit the grave, and they mourn.

Do you have a relationship like this in your life? If your spouse died, would you sleep on his or her grave?

Let's put it another way - would you be willing to turn a large part of your life into a memorial? Or would you move on, and leave the memory to fade into your history. Never forgotten, but dulled by time and, yes, eventual neglect.

What would your mate do?