Hemingway was an Idiot 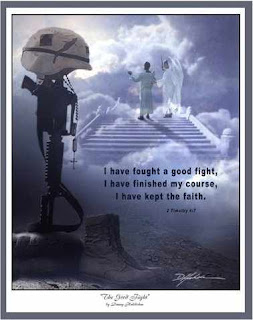 From the pen of Ernest Hemingway:

"There is no hunting like the hunting of man, and those who have hunted armed men long enough and liked it, never care for anything else thereafter."

A good description of a psychopath, and a grave disservice to every man (and woman) who found a calling in the practice of war.

But the reason for the change, in a mentally stable Marine of soldier, is diametrically opposed to Hemingway's callous bluster.

The true attraction isn't the thrill of the hunt, or a callous enjoyment of killing. It's love.

Not love of mother and country and apple pie. It's love for the men with whom that life is held in common. It's the resolve never, ever to let them down, even at the risk, or cost of one's life.

There is no sense of mission higher than love. There is no duty greater than that which calls one to put the needs of one's fellows ahead of oneself.

This calling, this sense of mission, becomes the defining force in life. Not fighting, and not killing.

And this is precisely what changes an individual, and makes the life that comes after so hard to bear, for it doesn't exist in the civilian world.

Men at arms are not coldly blood-crazed automatons, living only for the rush. They live, and die, closer to God than the soft and dissolute civilians in whose service they are expended.

"Greater love hath no man, than he who lays down his life for his friends."

Jesus would have fitted right into a Marine line company.
Posted by Andrew at 12:30 AM