Hippies - Not Yet Extinct. Unfortunately. 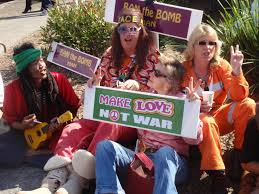 Facebook has lately been inundated by posts that would tell us how evil the wars in Iraq and Afghanistan have been. The latest is the breathless announcement that birth defects and cancer in Fallujah 'exceed those seen in Hiroshima and Nagasaki', The United States is blamed, obviously. Using depleted uranium and white phosphorus is supposedly the cause, used in 'military assaults'.

The source is Al Jazeera, which gained fame as the mouthpiece for Al Quaeda and the Taliban.

The technical idiocy of the argument barely merits mention; depleted uranium is highly non-radioactive, and white phosphorus consumes itself on exposure to oxygen. Depleted uranium is nonetheless very dangerous...if you happen to be a tank, since it's used in armor-piercing ammunition.

The main point, though, is not the absurdity of the argument, nor the reliability of the source. It's the desire to destroy the credibility of the United States, using a benchmark of cultural relativism that holds that Al Quaeda, the Taliban and their like have the same moral position as the US - and that evil is a matter of point of view.

It's hogwash. These people detonated bombs in hospitals and markets to make a political point, or simply to create chaos that would make their movements easier to hide. They used the mentally retarded as human bombs, and children as human shields.

When they capture Americans, they routinely torture them to death - and film it for later viewing on Al Jazeera. When American capture them, they're given first-rate medical treatment and are accorded more legal rights than most Americans enjoy.

So why the Facebook propaganda? Do the people who post this stuff really want to live under the kinds of governments they seem to support?

I doubt it. My guess is that they're seeking the kind of moral ascendancy that they perceive was gained by the hippies during the Viet Nam war. That if they can smear this country badly enough, they'll look like saints by comparison, and at no risk to themselves can acquire a feeling of self-righteous glory.

And, of course, they missed the 60s, and feel deprived. So they're throwing a tantrum.

Whatever the reason, one side effect is to create a feeling of wanting everything connected with the recent wars to go away.

And that is the main problem. Our wars were fought, at the order of a lawfully elected government, by an all-volunteer military. These people exchanged years of their life - and sometimes health, and life itself - for meager pay and the honor of being available to defend our way of life.

When the hippie wannabes throw enough garbage to make us all tired of the whole mess, they also intend to disgrace the people who fought.

It's unfair, and the height of ingratitude.
Posted by Andrew at 11:53 PM