Heartbreak and Faith for a Penny 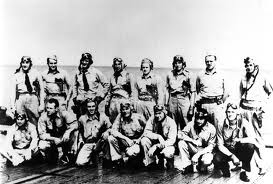 It's one of the saddest books I've ever read.

I recently bought a used copy of Robert Mrazek's A Dawn Like Thunder: The True Story of Torpedo Squadron Eight, by Robert Mrazek. It was withdrawn from a library, after only a year or so in circulation. It cost one cent, plus shipping. Less, actually - I had a coupon.

Maybe it broke too many hearts.

They never had a chance. All the airplanes were lost, and only one man, George "Tex" Gay, survived.

On the same dreadful morning, the "Torpedo 8 Detachment", under Lt. Langdon Fieberling, flew against the Japanese carriers from the airstrip on Midway. Of six airplanes and eighteen men, one airplane made it back to Midway, carrying two badly injured crewmen - Albert Earnest and Harry Ferrier - and a dead man, Jay Manning. The remaining five torpedo bombers, and fifteen men, vanished into flame and water.

Midway emerged as an American victory; by the end of that day all four Japanese carriers were sunk, or fatally damaged. The US Navy lost the USS Yorktown to a submarine, three days later.

Mrazek has done a masterful job in fleshing out these doomed warriors, telling us of their personalities and their lives. Their foibles, their joys, and the families and women who loved them.

As a Christian, I'm constrained to wonder if they were saved, before John Waldron led these young men to their aerial Alamo.

Were they Born Again?

And as a Christian, I begin to realize that it is not their confession with the mouth, nor their justification by faith, nor their personal relationship with Jesus that mattered.

It is their existence, and the compassion of the God that loved them as much as He loved His own Son.

It is their courage and their fear, their piety and there fleshly excesses. It is their final fall, in hope or blank despair.

They were children of the Most High. I believe they still are, and that they fly above the steets of gold.

For a penny, my faith has been changed - and strengthened.

I'll leave the last words today to Robert Leckie, who served as a combat marine on Guadalcanal, New Gloucester, and Peleliu