Giving Thanks For Lack 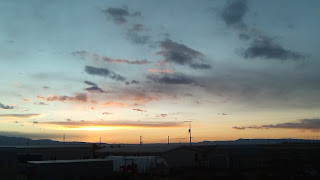 Thanksgiving sunrise (above) and sunset (below). 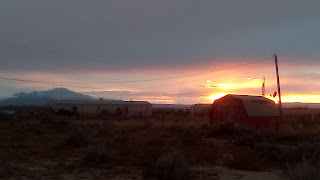 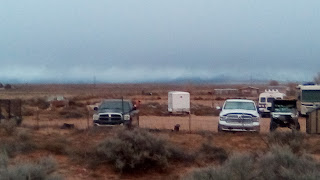 And the Manzano range after a front came through.
I never really thought to give thanks for lack, but there you go.
Aviation has been a part of my soul for as long as I can remember, but lack of funds always held me back from the participation for which I longed.
Now I understand why.
I didn't have the maturity to cherish the gift. I took stupid chances, once almost killed myself (I did manage to cut my throat), and, not having learned, continued to showboat.
Lack let me live.
Similar thing, with cancer. Insurance went away long ago, and instead of hanging my hopes on others' 'healing prowess', I was on my own.
I had to work with God to reinvent every day, to find motivation to...well, not thrive, that's out of reach...no, it's motivation not to quit. For one more day.
There's no anxious waiting for test results, no waiting rooms freighted with the scents of antiseptic and doom.
There's just the here and now.
Mind, by the time the insurance ran out the doctors had given up, and were only offering palliative care. So there wasn't a whole lot to lose.
But in my lack, I won.
I cannot afford insurance,
had to care for self instead,
and have thus found, with some assurance,
that had I wealth, I would be dead.
I had to fight each living day,
I had to learn my enemy,
but if perchance I might just pay
someone to do this work for me
I would have ended drugged and slack,
petitioner to human grace;
persist in this, you can’t go back
to that harder, better place
where alone you pit your will
against that thing which aims to kill.
This sonnet first appeared as a comment on Steve Laube's blog post Money Problems.
The Five Minute Friday prompt this week is LIKE. I like it.
Ok, dude, so well it's like
not too good and not too gnarly;
don't remember where I parked my bike,
and the worst thing, it's a Harley,
really too big to misplace
so on will come my thinking hat,
and thus I hope by God's bright grace
I will recall just where it's at.
Could it be out on the street?
Nope, it could be, but's not there.
Did I ride it out to greet
the arrival of the dogs' au pair?
Oh, I worried much too soon,
it's parked here in the living room!
Doesn't everyone keep Hogs inside?
Three and a half minutes. Doesn't show, eh?
Here's The Holly And The Ivy  by Mediaeval Baebes. Yes, really.
Sylvia says, as long as I don't lack ice cream, no-one gets hurt. 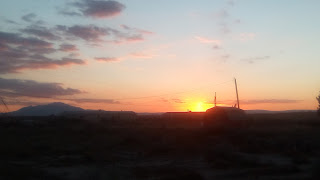 Ok, so these days just aren't going
just the way that I had planned;
there's no way that I'll be knowing
what may be the next at hand,
but each day still holds every hour
that the Lord above ordained,
and it is my choice to be sour,
or to live each with unfeigned
gratitude for every smallest blessing,
and for the biggest blessings, too,
for to be truthful, I'm confessing
that, 'till now, I never knew
that so much could be provided
with joy and pain left undivided.
The Five Minute Friday prompt this week is LAUGH. It's what I do best!
If you cannot laugh at this,
you really are not trying,
so give the whole darn thing a miss,
'cause what's the point in dying
if its humour hides from you,
and puking becomes tragedy;
I mean, what else is there to do
but just not take it seriously
along with its most bestest pal
(yes, I mean incontinence)
which makes you race on down the hall
just to stumble at the fence
of quickly taking down your jeans,
and you can guess just what that means.
Four minutes flat, no apologies.
Music from Van Halen, with Jump.
Sylvia will jump for ice cream. 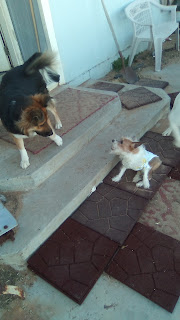 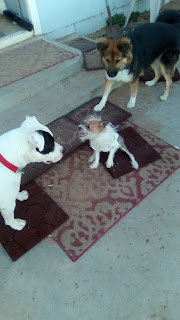 Belle The Wolf and Henry are playing with Bella, who was found in 2013, broken-backed, in a flooded ditch. Her spinal cord wasn't severed, but the spine itself was shattered. She can get to her feet, and take a few steps. But she usually just scoots around, and is a terror to the big dogs.
So the elections are over. I didn't pay it much mind, taking the view (watch the very short clip) of Crocodile Dundee.
It's just that no more campaign mailers means that I have to find something else for the bottom of the parrot's cage.
Well, if we had a parrot.
Politicians come and go,
bless their little cotton socks,
and when speaking often show
they're dumber than a box of rocks,
saying this, misspeaking that,
then onward to a photo op,
holding babies and a cat
that you can see they'd love to drop,
but they do make me really glad
that we have committee rule,
for it would be quite clearly mad
if we'd bow to a public fool
with vision of newborn retriever
and saw in him a True Believer.
Still, there are good public men and women. It's just that they seem to die young.
The Five Minute Friday prompt this week is EXTREME. This might not be extremely hard.
People yell from left and right,
words of quandary and riddle,
never thinking that they might
just meet in the middle,
and share a coffee or a beer
(heck, pass around a joint!),
'cause it's getting really clear
that we're close to the point
where agenda and ideas
come to matter more than life,
and Hell's on a massive bender
in celebration of the strife
that pushed us to a dark extreme
on each side, beyond obscene.
Four minutes thirty, including a hesitant keypad. Good enough.
Music from Dion, with Abraham, Martin, and John.
Sylvia votes for ice cream. 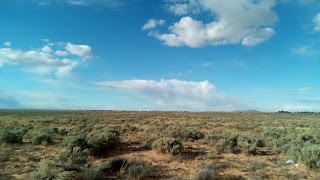 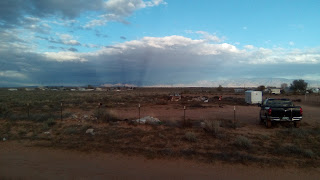 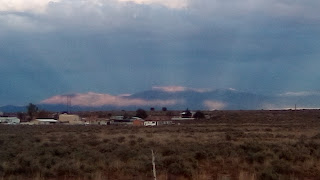 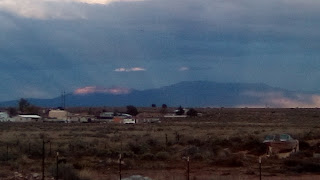 I love the interplay of light and shadow.
It's been a rough week (internal bleeding stopped for a bit, and it's back, with fever) but I don't do despair, so I decided to write a sendup of Edgar Allan Poe's most famous poem, just for fun. And as poetic justice for all you out there who had to memorize parts of the thing...or, for Pete's sake, the whole poem.
The poet pondered, weak and weary,
self-pity for his lost Lenore
in rhyme that was quite awful, clearly,
when there came at chamber door
a tapping from a spectral raven
that reinforced his pain and sorrow
to justify his bad behavin'
like there wasn't no tomorrow.
I've been there and I've been back,
and I have this word for you
that faced with Satan's sad attack
the one thing you can say that's true
to bird now perched on head of Pallas
is, "Shove despair right up your a**!"
The Five Minute Friday prompt this week is PERFORM.
My life's become command performance
that is staged for God alone,
mix of peace and violence
that's something of a twilight zone
between the promise and the real,
between the newly sown and sere,
between the hunger and the meal,
between the hated and the dear,
but somehow as I tread the boards,
the footlights blinding in my eyes,
I know that I am headed towards
the truth that will dispell the lies,
and make of this conundrum vast
a memory of distant past.
With a balky keypad, five and a half minutes. Well, I tried.
Appropriate music from Smash Mouth.
Sylvia barks at ravens, and won't share her ice cream with them.