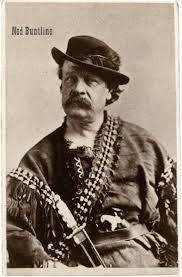 Recently a friend said that he felt he was born too late, that he wished he'd lived in the Old West.

Most of what I read is either history or memoirs; there's a lot to learn from the way people reacted to situations in the past, which can serve as inspiration for my own life, or at the very least give a better understanding of the good - and bad - that people can do.

But to want to live in those times? No, thanks.

The truth as I see it is that we are really living in the best of times...for who we are. We've been formed, for better or for worse, by the milieu through which we've moved for the decades of our lives, and to wish that away doesn't take into account the adaptations that we've learned, and earned, through our experiences.

Going back to the "American West" would make us face a degree of change that would make the hardiest soul run screaming back to the present. I mean, how would you like...
The list goes on. Would you really accept all that, for the perceived Romance of the Frontier?

Beyond the practical, a wish to be "elsewhen" is almost an affront to God. You've been made to fit the life you have. God crafted your soul, and set you to your task in this world, this time. To say that you feel like you were born too late means...

By all means, learn about the ones who've gone before, make their experiences part of your own heart.

And let your experiences be the same for your children's children, without resentment or reservation.