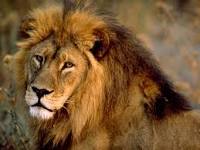 "Yeah. I really dig how much he liked big cats."

"Sure. Like, his friend, Jude, the guy who wrote that book in the New Testament, he had a pet lion."

"You know, 'Lion of Jude'! Obviously, he had a pet lion. That's cool. Jesus and his Apostles, wandering around Israel with a lion. Bet the Romans didn't know what they were supposed to think about that!"

"Well, they had different ways of saying names, right? Jesus was Yeshua, Paul was Saul, Abraham was Avram, right? So Jude had a lion."

"And there's more. Jesus obviously had a soft spot for leopards."

Barbara's eyes were closed. "He did, did he?"

"Well, he was always healing them, right? Leopards get a bad rap, But Jesus liked them."

"If you say so." My wife likes animals, too. But she's never really had much to do with big cats.

"I wonder why he never got involved with tigers?"

"Probably because Israel's a desert, right? I mean, tigers live in the jungle."

"Yes," said Barbara slowly. "I suppose they do."

"I wonder if any of the Apostles had a pet cheetah?"
Posted by Andrew at 12:30 AM