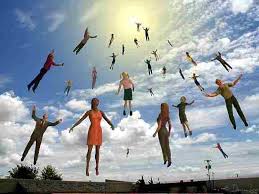 Pop quiz - was the rapture ever mentioned by that name in the Bible?

Nope. The term was probably first used, or at least first introduced, by a father-and-son team of New England clergymen, Increase and Cotton Mather. It was based, of course, on Paul's famous passage in Thessalonians about 'meeting Jesus in the air', and several similar references from Revelation.

There's also the comment Jesus made, about two people working in a field - one will be taken, and one will be left.

It's an interesting and attractive paradigm, the possibility that one day you may suddenly be transported from your daily life into something completely different, and completely wonderful - permanent life in Jesus' presence. Who wouldn't want that?

Before we pack our bags...well, spiritually...there is something we may want to consider.

The Rapture, whenever and however it happens, will be the beginning of some really hard times for the people left on Earth. You get the free pass, and you get to miss all that. But a lot of people won't, and they'll need the help and example of Godly people, more than ever.

The Great Commission will be needed then, more than ever. And precisely at that time of need, the harvest will be waiting, but will the workers be few?

So many people who look forward to being Raptured Up are also those who claim they'll witness the Gospels, even at the risk of their own lives.

There's something inconsistent here. Either you're dedicated to the Great Commission, or you're not. If you are, being pulled out to leave the rest of the world to its own devices - and at the mercy of Satan - should leave an awfully bitter taste.

If you're not all that committed to the Commission, you might want to check your direction when you feel the 'float' coming on. Up is good, but if you're lukewarm on saving souls, up might not be operative. Something Jesus said about 'spitting out'...

We may not have a choice - but someone who's really following Christ should be hoping that they live a Rapture-free life, to be able to make the most of every possible minute of witnessing.

Anything less, and you're not Jesus' hands and feet - you're just hoping to do enough to get by, and get away.

Will you tell Jesus that He went to the Cross for that?