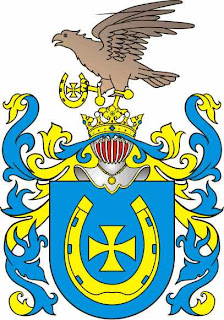 I just discovered something, totally out of the blue - we're entitled to use the coat of arms of the Polish House of Jastrzebiec.

It's a very old bit of heraldry, dating back before 999, and the reign of Boleslaw the Brave. The Jastrzebiec clan were said to be the inventors of the horseshoe - hence its inclusion in the coat of arms.

For some reason, I'm chuffed to discover this. I've never been much for family history, and genealogy bores me to tears, but having a bona fide coat of arms is something special.

Why? Is it part of some deep-seated fascination with royalty? I do admit to having stayed up all night to watch Prince Charles marry Diana, and to watch Prince Andrew marry Fergie. And yes, I was dismayed that both marriages ended in divorce. Something inside me wept at that.

I know all the words to "God Save The Queen".

But those who know me would know that I have scant respect for authority, much less a forelock-tugging kowtow to the House of Whatever.

However, now the shoe is quite on the other foot - I AM part of the House of Jastrzebiec.

It's making me walk a little taller this morning. I've always admired the Poles as a martial nation - their reputation during WW2 was one of reckless, ruthless courage. But I always thought 'Budek' was a Czech name. Nothing against the Czechs, mind you, but being Polish is, for me, something special.

Being Polish nobility is something very special.