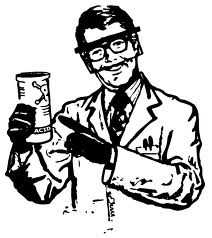 When a politician says something, we don't believe it - and we shouldn't.

When a scientist says something, we usually believe it.

The common perception is that science is about truth. Many young people enter the profession, thinking that they'll be able to work in a rarefied purity of purpose. They imagine that the discoveries they make, small or large, will move mankind toward a better and more complete understanding of Creation.

It doesn't work out that way.

Science is about money, and it's about politics. Truth can be a convenient platform. And that's all.

This may sound discouraging, and it is. The scientific world - the real one, driven by the factors that allow things to get done, money and power, simply doesn't care about truth. It cares about supporting its own.

Good things do get done, but it's not nearly what could be accomplished.

As a case in point, the cause - and cure - for stomach ulcers was discovered in the late 1980s. A researcher in Perth, Western Australia, found that ulcers were caused by bacteria, and could be cured by antibiotics. To prove it, he drank a cup of water containing the disease-causing organisms. He got ulcers, and cured himself with the appropriate antibiotics.

You'd think that he would have been hailed a hero. Quite the contrary - he was told that his research was of only limited value, because he didn't come from a big-name school, and he didn't work at a major university. The results were buried, published in a minor journal, and ignored, until an 'approved' researcher deigned to follow up his work, twenty years later.

So - the next time a scientist steps forward to tell you the 'truth' - smile, and nod.

And know where he's coming from.
Posted by Andrew at 12:36 AM