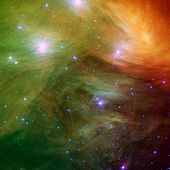 I saw a New Age book in which it was claimed that the salvation of mankind would come from a group of spirits from a planet orbiting the Pleiades.

They told the author, "We're from the Pleiades!"

The Pleiades, in case anyone's forgotten, are a group of stars (sometimes known as the Seven Sisters). They look as if they're quite close together, and in cosmological terms, they are - the cluster has a radius that ranges from 8 to 43 light years.

And the seven stars visible with the naked eye are the tip of the iceberg - there are many more in that area. (About 1000, and people with exceptional eyesight can discern up to 14 visible starts.)

The area in which the Pleiades reside is BIG. Stars are big, and they're heavy. They have a pretty tremendous gravitational attraction, and they tend to be pretty far apart. Like, billions to trillions to quadrillions of miles. (For reference, the Earth is 93 million miles from the sun, and Pluto, the outer sentinel of our solar system, is about 2 billion miles away.)

The Pleiades look close together because they're so far away. In reality, any planet 'orbiting' them would have a long, cold ride through its year.

New Age is pretty unconvincing anyway, but throwing in astronomy that's side-splittingly hilarious does things to its credibility that are not repairable.

And these people have a hard time believing in Jesus????