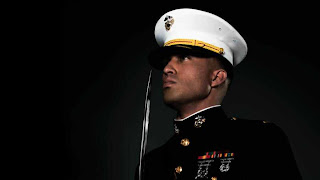 One of the first lessons taught at OCS is that the Marines under an officer's command are assets to be used to accomplish a mission.

Used, and sometimes expended. An officer has to be able to face, with serenity, the fact that some of the commands he will give will get some of his men killed.

He has to be willing to send them into danger, without leading them there himself, and being the first to fall.

Falling at the head of his men is not an officer's primary job, though that may become necessary. His primary job is the mission, and the commission he accepts, signed by the president, carries a weight of responsibility that is heavier than most people think.

It's the responsibility to make life and death decisions, and pay for them with lives other than his own.

This is a good lesson to remember when we wonder just what God is doing, by allowing dreadful things to happen in our lives. Doesn't He love us? Doesn't He care?

Of course He does. More than any Marine officer cares for his men.

But the mission is paramount.

Often, an enlisted Marine won't know all the details of a the mission, and will rarely have full knowledge of the tactical, much less the strategic plan. He only knows, in the end, that he's under orders.