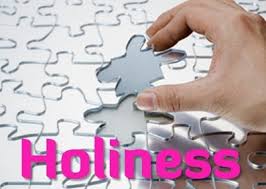 There is a very sincere TV preacher who says, every so often, "I live a life that's holier than 99% of Christians."

He goes on to explain that he doesn't drink, smoke, or swear, and that he devotes much of his time and thought to God.

His self-assurance is quite impressive, but he's completely missing the point. Holiness has nothing to do with what you do, or don't do. Let me repeat that. NOTHING.

Holiness is simply being a lens that focuses God's love and compassion into the world. It's being the hands and feet of the Lord, and not hiding the light of your faith under a basket.

Holiness is the absence of self, and the total presence of God. It's not that your personality is destroyed, mind you, and the God somehow takes over your body, like a creepy alien in a bad sci-fi flick.

Holiness is also surrender, but it's an intelligent surrender. A popular song has the title, "Jesus, Take The Wheel". That's not right. You don't just throw up your hands, and sit back and do nothing. God made you smart. He didn't make you a weak, whining little loser who can't be perfect so he gives up.

Surrendering to holiness is saying, "OK, God. I'll follow your lead. Whenever I don't know what to do, I'll hit the knees, open the Book, and ask, and when you give me an answer, I'll do it. Even if i don't understand it."

It's great not to swear, because it's crude and boring. (The normal curses you're thinking of that 'use God's name in vain' actually don't...they just fall into the crude and unimaginative category. Truly using God's name in vain attaches it, seriously, to something antithetical to His purpose - it's intentional and intentionally evil, and has nothing to do with the shock and anger of a hammer applied to a thumb.)

But if you think this is taking you one step closer to holiness, you're wrong.

You don't walk up to holiness.

It's more like jumping off a cliff.
Posted by Andrew at 12:30 AM