The Toughest Question in Evangelism 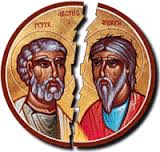 How do you talk about Christ to someone who already has a strong - and different - faith?

It's one of the hardest jobs in evangelism, and I'm not sure that there is a good answer, any more than there is one 'right' answer.

To begin with, you have to start from a position of respect. A devout Muslim, Hindu, or Buddhist is probably already living a life, in its details, that many Christians would consider good, even holy. To dismiss, or worse denigrate that will result in the shades being drawn against you - and worse, against Jesus.

You're an ambassador for Christ, remember - and the most important thing you can do is to do what He would do. And he treated almost everyone with care, compassion, and respect. (The merchants in the temple are an exception, all the more powerful because of the contrast with his usual way of working.)

As Christ's representative, the most powerful tool you have to convince someone is the effect of Christ on your life. Quoting the Bible won';t help - every other religion has scriptures. Promises of Heaven won't help - every other religion believes that its adherents will achieve eternal life (and they usually believe that you, as a Christian will too...this is where they may feel that they are a step ahead of you, at least in 'tolerance').

What Christianity has, that no other major religion does (at least to nearly the same degree), is the willingness to service and sacrifice. Christ's example is one of dying so that others might live, and that is possibly the strongest ethos in the human soul.

But be careful - if you take that into the redemption of original sin, Adam's sin, you'll lose your argument. Most non-Christians simply don't believe it, and feel that there's an element of unfairness so glaring, blaming all of us for Adam's sin, that they see the Christian God as preposterous.

Far better is to use His death as the ultimate victory over the last enemy - death. To say that He died and rose to show us that this is what the world will be like, from that moment on, opens eyes and hearts.

The rest, original sin and all, will be learned in due time. But you need an open door, and this is one you can't break down.

You can only knock, and when the door's opened, extend your hand, leaving the rest to God.