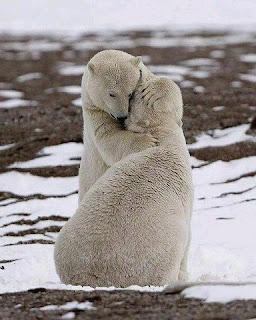 For a lot of couples, the transition from a nice weekend to the workweek to come can be fraught with peril.

It's all too easy to lose the good feelings and memories of the weekend, last thing Sunday night. Think of a weekend's memories as a vase; you can take it into work with you, and look at it when the office politicos are rampaging through the cubicles, empire-building away with grimly gay abandon.

Or, if you drop and shatter that lovingly crafted vase, you'll walk through the office door looking like the Taliban's latest recruiting poster. At least the political animals will leave you alone, 'cause their hats would;d look stupid sitting directly on their shoulders.

It's so easy to drop the vase. One careless word, one nudge from the evil eye of the television, and the joy-lights will flicker. The word becomes a sentence, and a harangue, and the joy-light gutters out, leaving only wisps of smoke to remind you of what was. (Vases and lights, and didn't I have a blast, mixing metaphors!)

Keeping the magic alive is easier than you think. It takes choices, and it takes discipline. Just two major parameters!

But beyond those, here are some further, practical applications of what you can do -

Going out the door on Monday with a warm glow from a nice 48 hours can set the tone for the day, the week, and sometimes your whole career.

It can help you recognize opportunity, mend rifts, and overcome obstacles. Riding the crest of a wave of joy will bring sunshine into the workplace.