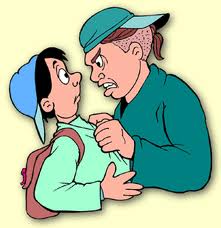 When I was growing up, a bully was someone who waited for you after school, and threw you headfirst into a culvert. It was something that just happened, and eventually Mr. Bully would meet someone bigger and meaner, and get the stuffing kicked out of him. (Never her, in my experience, but girls may have dealt with their own sort of bullying.)

It's different now - the Internet has allowed a new generation of bullies to flourish, without the risk that an old-school bully took - that his victim might just land a lucky punch or kick. The New Bullies can work their misery in safe anonymity, behind an electronic wall.

And they are out to kill. they aren't aiming to hurt the body; they're out to destroy souls. And young people are killing themselves, driven to despair that their lives can be ruined by lies spread across the Internet.

Why do we tolerate it (and we are tolerating it, please make no mistake)? One reason is practical - it's not that hard to find the origin of an Internet hate campaign, but it's expensive. Many of these kids know the rudiments of covering their tracks, and it takes some sophistication to reliably run them to ground.

The other reason we tolerate it is the culture of victimization. Everyone's a victim, and perpetrators are really the victims of their own victims...they've somehow been goaded into their predatory ways, and therefore deserve special care.

In addition to these, there's the Culture of The Child, taking "a little child shall lead them" just a bit too far. We've allowed children to be a world unto themselves. Ask any high-school student...it's a cruel and insular world in which they live, with no real accountability except to one another (and to school administrators who sometimes swoop in, deus ex mechina, to harshly enforce some regulation, and then disappear.

After all, the worst among us might just be the best, given a chance.

The best way to rid ourselves of this blight is pretty simple - terminate the Culture of the Child. Hire teachers and administrators that will not only follow the lesson plan, but who have the understanding, and the authority, to enforce good citizenship. let the kids know that their independence is over, and that they will be answering to the adult world for their actions.

After this, truncate the 'victimization chain' to two links - perpetrator and victim. Period. There are no extenuating circumstances for bullying.

Will we, as a society, do this?