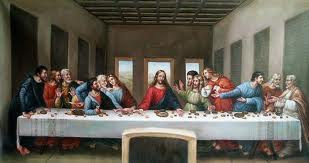 Evangelism isn't easy. Mind you, I don't suppose it was meant to be a walkover, because along with bringing the convert to Christ, it sharpens the faith of the evangelist, and a sword is sharped on a whetstone.

I'm an untutored fisherman. I came to the Christian faith through a fairly roundabout path; never went to bible college, never went to Sunday School, and when I tried Bible Study I came close to losing my faith.

Additionally, I'm not by nature a very emotional person, and describing an impassioned salvation of my soul would be inaccurate, and for me, impossible.

So the toolbox was pretty empty, but I wanted to give people I met the Good News.  What to do?
The main arguments against Christianity were:
Other arguments really didn't hold water, and eventually devolved into these two.

The "Jesus never lived" argument was easy to demolish, since He was mentioned by a couple of contemporary sources. Josephus, for instance, from whom we have the description of the siege of Masada, speaks of Him.

The second argument's harder, since there are no non-Biblical accounts of the Resurrection. Telling someone who doesn't believe (yet!) that "the Bible says it, so it's true!" is remarkably ineffective in that it creates a circular argument.

But we don have "something". We have the rapid rise of a new religion that would come to be called Christianity in the hundred years after Jesus' crucifixion.

And we have the people who walked with Jesus; the Apostles. We know who they were, where they went, how they died; in some cases we have fairly well-documented tombs.

How they died. With the exception of John of Patmos, the Apostles were martyred.

And there's the answer. The Apostles were in a position to know, if anyone did, whether the Resurrection was true, or whether Jesus' body was merely stolen. If it was the latter, then their deaths were in the service of a known lie, and not even a madman will accept a hideous death to promote a cause he knows is false. And these were not madmen; no one's ever claimed they were.

Here was the key that worked for my audience. A rational argument that comes as close as one can to "proving" the central tenet of Christianity, that Jesus died and rose from the dead.

Everything else could build from there.

What tool do you use, or have you used, to attract people to Christianity? What worked, and what didn't?
Posted by Andrew at 12:30 AM