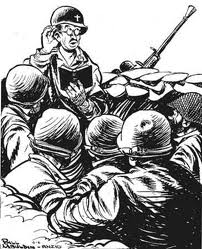 Simple. To be a part of something bigger and more noble than themselves, so that their lives can gain stature, and be uplifted by association, and by inclusion.

Look at the phenomenon of Stephen Ambrose and "Band of Brothers". Dr. Ambrose was a dedicated professional historian, and a skilled writer, but when he decided to tell the story of the 506th Parachute Infantry Regiment's E Company, he opened a floodgate of emotion and need in the United States.

"Band of Brothers" is the story of a group of men who were ordinary soldiers at the time - skilled, yes, but there were hundreds of other military units manned with competent citizen-soldiers, and dozens with an equivalent level of proficiency.

But what was ordinary then seems extraordinary today.

Dr, Ambrose recognized the innate nobility in these men, and the justice of the cause in which they fought, and in which some of them died. It's not that he made them ten feet tall; he just cleared away the underbrush of sad years that had grown up in the last half of the 20th century, so we could see their true stature.

I think we want that stature today. We want heroes, and causes of mythic proportions. We want to feel that we can be better than we think we are.

Better than we think we are. The real point that Ambrose (and Tom Brokaw, author of "The Greatest Generation") makes is that these men were 'common', that they came from every region and social class. They didn't see themselves as noble, and like Bill Maudlin's cartoon characters "Willie and Joe", many of them griped their way through the killing fields, wanting to get it done and go home.

We can be better than we think we are. We CAN be as good as we really are.