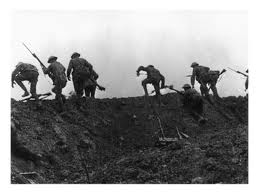 As I write this, it's November 11, 2012 - Remembrance Day in Canada, Veteran's Day in the US, Armistice Day is many other countries. It's the anniversary of the cessation of hostilities that ended World War One, at 11 am on November 11, 1918. The eleventh hour of the eleventh day of the eleventh month.

World War One was supposed to be the War To End All Wars - the introduction of the machine gun, the airplane, the submarine, and the use of poison gas on the battlefield was supposed to make the prospect of war so ghastly that the sword would be forever sheathed. It didn't happen.

All war is waste - and no glory. But World War One did hit some high points in the wastage of human potential...on July 1, 1916, the first day of the Battle of the Somme, the Allies lost over 20,000 men. In a single day.

Many of these were lost in their assault across "No Man's Land", the area between the Allied and German trench systems. The Allied troops left their trenches in an act called going "over the top", and walked - they were expressly told not to run - across the 400-800 yards of No Man's Land, flayed by German machine guns and artillery all the way.

One of the killed was William Hodgson, who two days before his death penned this heartbreaking poem, a farewell to the life he was soon to lose:

by Lieutenant William Noel Hodgson, MC, 29th June, 1916
By all the glories of the day
And the cool evening's benison
By that last sunset touch that lay
Upon the hills when day was done,
By beauty lavishly outpoured
And blessings carelessly received,
By all the days that I have lived
Make me a soldier, Lord.
By all of all man's hopes and fears
And all the wonders poets sing,
The laughter of unclouded years,
And every sad and lovely thing;
By the romantic ages stored
With high endeavour that was his,
By all his mad catastrophes
Make me a man, O Lord.
I, that on my familiar hill
Saw with uncomprehending eyes
A hundred of thy sunsets spill
Their fresh and sanguine sacrifice,
Ere the sun swings his noonday sword
Must say good-bye to all of this; -
By all delights that I shall miss,
Help me to die, O Lord.
If William Hodgson was not to truly die in vain, then his last words to us have not only to carry down through the years...they have to inspire us to act, in some way, to alter the flow of time. This sweet lament is both a valedictory of his heart, and a challenge, because to a greater or lesser degree we pass unheedingly through large tracts of our lives.
How does this poem affect you? Is there anything in your life, or thought, that you'd feel inspired to change?
Posted by Andrew at 9:44 PM