Better To Be Eaten By Chihuahuas... 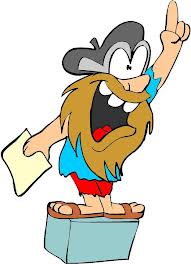 Most people dread public speaking. Some simply loathe it. And there are certain select individuals who not only claim to enjoy it, but give every evidence of actually reveling in the process of speaking to an audience.

These people are clearly crazy, and should be locked up for their own protection, lest we find their existence intolerable.

But, if you absolutely have to speak to a group of people, and every way you've tried to get out of it has failed (someone brought a fire extinguisher to your well-planned self-immolation), here are some suggestions. They're not 'tips'. 'Tips' sound like they might work. With these, who knows.


And, finally, remember this...there's at least one person in the audience who wants to be there even less than you do!
Posted by Andrew at 10:56 PM