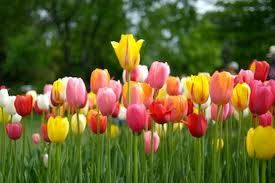 Once upon a time there was a very hard-headed Pit Bull named Tulip...

Tulip arrived in 1998, which makes him probably 15. Pretty ancient for a dog, but not terribly unusual for a Pit. He was unexpected - oh, yes, sorry. Tulip is a boy. No, he doesn't have any gender-identity problems. He's a dog.

He's been picked up by the campus police at the college in California, where I worked as a lab technician. Seeing him confined in an enclosure which housed the PD's emergency generator, I asked about him, and was told that county Animal Control would be coming to pick hip up. At the time, the county was killing every Pit that came into their custody, as policy, and I mentioned this to the cop. He shrugged, and said it was too bad.

Too bad indeed. Somehow, Tulip vanished from the enclosure, and spent the rest of the workday in a box that was strapped to a hand-truck, being trundled from my office to the lab and back again. The box had openings for hand-holds, and I was watched by one calm yellow eye.

When he got to the vet, Tulip elicited some sympathy. He was thin, filthy, and his collar had been stapled to his neck.

He healed, and grew, but childhood had left scars. He didn't play well with others, and picked several fights with a big coonhound named Atascaedro. Tasky was imposing of size but meek of character, and would inevitably faint when confronted. The other dogs supported Tasky, until a white Shepherd named Hallie stepped in to make peace with the newcomer.

Hallie was small for a shepherd, but extremely strong-willed. She had a habit of stealing cups of coffee I made for myself, even drinking them when they were too hot for me. She tamed Mr. Tulip by the simple expedient of grasping him by the scruff of the neck and slamming him against the nearest wall. Cooperation came quickly, and they stayed together for nine years, until Hallie's death.

At that point, Mr. Tulip became very depressed. We tried pairing him with Sylvia, the Pit whose picture graces this blog's homepage, but Sylvia wasn't quiet as understanding as Hallie had been. Mr. Tulip picked a fight with her, and lost, badly.

So Tulip was alone. The run on one side was occupied by Rufus, a jack Russell, and on the other side he had Labby, a black lab, so he wasn't too lonely. But I think he missed having someone to bump shoulders with.

A few weeks ago, Tulip developed an inner-ear problem common to older dogs - it was like he was stuck on a spinning turntable, and he could not walk a straight line. There's no cure, but Dramamine (meclizine) is a fairly effective pallative. It takes awhile to become effective, though, and while Tulip enjoyed the personal attention he got from me and from Barbara, I had the feeling that something was missing.

One day I noticed that Rufus was following us along the fence, and I helped Tulip keep a straight line. Rufus is a tough little fellow, with the build and resilience of a rugger ball, and I thought, why not?

So in he went. he ran up to Tulip, sniffed at him. Tulip lurched to his feet, and his first steps started what looked like an uncontrollable right turn. I went to catch him, but wasn't needed.

Rufus was there. He was at Tulip's side, paws on the big guy's shoulders, steadying him. He followed Tulip around, and every misstep, Rufus was there.

And he still is. Tulip's balance is almost completely restored, but Rufus always walks by his side. They are fed separately, but Tulip always leaves a little bit in his bowl for his buddy. They curl up together in the sun when it's nice, and together in Tulip's rather large doghouse, when Tulip's tired.

And there are some who say dogs have no souls.
Posted by Andrew at 11:29 PM