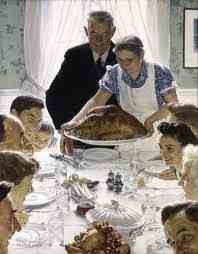 It seems that the American holiday tradition includes showcasing dysfunctionality in families. In a movie, or on television, it can be funny, though it's often the uncomfortable kind of humor that we laugh at, and not with.

In real life, it can be funny in retrospect - epic battles at the Thanksgiving table can be grist for the conversational mill of family reunions for years to come.

But while it's happening, watching what's supposed to be a festive event spin out of control is painful, and ultimately profoundly sad. It's the irrevocable ruination of a day that can't be brought back - and even if the fight's stopped and apologies tendered, it's never the same. Something is lost, and even if you schedule another 'make-up' dinner for next week - it doesn't come back.

What to do? I believe - I hope - that if you've read this far you'd like to avoid the fights, and create a holiday that's memorable for being peaceful and enjoyable. While you clearly can't control everyone's behavior, youcan control your own, and that can go a long way to spreading oil on those choppy waters.

Here are some suggestions -
You may be thinking, "fine, great, but this won't work with MY family". Maybe not. But will making the effort make it worse? Probably not, so what do you have to lose?

You may also be wondering why you should be the one to carry the burden. The short answer is why NOT you? You're there, you have a vested interest in making the experience pleasant, and unless you secretly enjoy conflict, you're acting in your own interest. Besides, if you set an example, others will follow.