When The World Dials 911 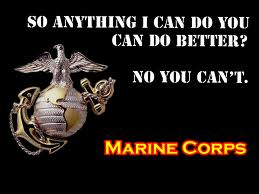 The Marines are the smallest branch of the fighting services, but they hold a place in America's heart that is both large and unique.

Large because the Marine Corps' place in modern history has been gained through some truly outsize events.

Just after the Japanese attacked Pearl Harbor, they stopped by at the tiny atoll of Wake to overwhelm the tiny Marine garrison stationed there. Instead, it was the Japanese who were overwhelmed, and their invasion failed. When they returned with vastly superior forces, the Marines on Wake fought to the bitter end, only ceding the island after inflicting a fearful toll on the invaders.

A few months later, the First Marine Division landed on Guadalcanal, in the Solomons. It was there that the limit of Japanese empire was established, and the long, slow path to victory in the pacific began.

To these can be added Tarawa and Peleliu, Iwo Jima and Okinawa. Twenty years on Marines made the headlines in Viet Nam, in the siege of Khe Sanh and the battle for Hue City

But beyond the numbers, and beyond the mythos, the Marines are perhaps the most beloved branch of any armed service to walk the earth.

They're an anachronism, in a way, with pure infantry as their main calling. other services may employ ever-larger quantities technology, but the basic marine mission is still to support the 19-year-old lance corporal who's advancing through the mud.

And as such, their standards have remained high. You may want to be a Marine; but not everyone with the wish has the ability. Gaining admittance to this club requires sweat, blood, toil, and character, because the marines don't want weaklings who'll fold under pressure.

The drill instructor hurt your feelings? Take it up with your congressman, but in the meantime get off post and don't come back.

Your arm wrecked by a bullet? You still have another one, don't you? Keep shooting.

Because of this unapologetically neanderthal stance, with machismo simply splashing off the top, the Marine Corps have earned our love, and our trust. When asked "who would you turn to for help?", given the choices of a doctor, a clergyman, a congressman, or a Marine, guess who wins, with over 97% of the votes?

And who shows up every Christmas, standing post for Toys For Tots?