Amish And Built To Stay That Way 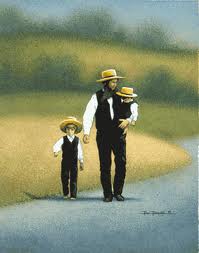 Have you ever wished you were Amish? Did you ever look at these singular 'people apart' in the media, or in person, and feel a stirring in your heart..."What these people have...I want that."

I certainly have. (Don't bother telling my wife. She won't believe you.)

And I'm not alone. One might say that the Harrison Ford movie "Witness" started the ball rolling, and writers like Beverly Lewis have illuminated aspects of the Amish life...and people are buying their books. (Yes, we have a Beverly Lewis shelf.)

What's to love? I think for most people it starts with the sense of community, belonging to a group of people who are honor-bound to come to your aid...just as it's a challenge to your honor, to be ready to come to your neighbor's aid. I think there's a strong need to be challenged in this way, in our United States.

I'm certainly not naive enough to think everyone's best pals, and that the internal politicking in an Amish community isn't dissimilar to classic Small-Town America.

And yet...there are rules. In this land of freedom, I think we want rules that will help us honor the commitments we want to keep.

I think that maybe we want to be called to dress modestly, and keep a demeanor to match our clothing.

Doing with television, the Internet, and even electricity...hmm. That's pushing it. But some of the nicest evenings with my wife were spent on nights when there was a power failure. Conversation over candlelight was something I'd never known I'd missed. And some days, now, I just turn off the TV and the computer, and listen to the quiet. I think we want to invite quiet back into our hearts.

Finally, the way the Amish life is centered on faith is intriguing. There's no question about going to church, because it's what one does, plain and simple (get it?). It's as much a part of being Amish as going to a golf course is part of being a professional golfer.

Besides, next week's service might be in your house, and then where will you go? I think we want to invite God back into our houses.

Obviously, the Amish have their warts, and there are aspects of the life that would leave us uncomfortable indeed (like shunning) if only because we didn't grow up understanding it. The shadow areas are there, but the dream transcends them.

The appeal of being Amish really isn't based in a desire to run away from our busy lives. Instead, it's something to run to. It's a life that would call us to be more than we ever thought we could be, and better than we ever dreamed we could be.
Posted by Andrew at 12:24 AM