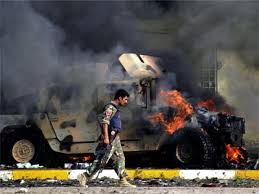 When I started this blog I had intended not to write much about Post-Traumatic Stress Disorder (PTSD). Not because it's not necessary to talk about, but because it's too close to home.

I've changed my mind, thanks to Ron Paul. On February 2, 2013, Chris Kyle, a SEAL and the author of "American Sniper", was killed, along with a friend, when an attempt to help a Marine veteran of Iraq went horribly wrong. What happened still isn't clear, but they were at a shooting range when the man apparently turned on Chris and his friend.

Mr. Paul offered condolences, but then went on to say that the attempt to help was misguided, and that in any event, "those who live by the sword should expect to die by the sword".

Ron Paul is an idiot.

Combat is something that sears the soul. It exposes a person to events that are so far outside the expected course of life that any coherent frame of reference is shattered, and a new paradigm for life must be built, and built quickly.

The circle of trust is one of the first things affected. Normally, we place a level of trust into the people around us, that they'll behave in ways that are expected, rational, and congruent with the values that bind our society together. Combat - especially asymmetrical combat against "insurgents", changes that.

Suddenly, a pile of trash, or a dead animal by the side of the road, may hide a bomb big enough to kill a vehicle, packed with nails and bolts to shred the body. A group of people may be having an afternoon chat, or they may be hiding an insurgent with a rocket-propelled grenade.

An oncoming vehicle may suddenly swerve into your lane, and self-detonate.

A pretty girl may be willing to flirt, and she may also be wearing a suicide vest, packed with explosives.

In combat things happen quickly. Reaction time is the key to survival. Not just ducking, but also assessing the situation and fighting back, hard.

And what is seen there, what is smelled there, what is heard there...has to be blanked off, so that duties can be carried out. The dead child, the charnel-house of a suicide bomb in a market, have to be walled off with a wall of numbness, because the only viable human reactions are tears, and despair.

At the end of all of this, the Marine or soldier is expected to return to an America that has little understanding of, or interest in the war, and which also maintains a degree of disapproval for the whole thing, fueled by political and economic considerations, and bolstered by a whiff of self-righteousness. "Our men and women went to war, while America went to the mall" is not a cliche. It's all around us.

PTSD is a psychic dislocation. War changes us, and the changes are permanent. What's seen can't be forgotten, and in the best case, the reactions go into a box that can be readily pulled out.

We live in a society in which the quick fix is prized above all. Whether it's through medicine or therapy, PTSD should be curable.

Or you can withdraw, because the effort isn't worthwhile. You can shield your heart and soul from injury and from the blind contempt of the unknowing, choosing to let yourself remain, like Mohammed's tomb, suspended halfway between heaven and hell.

This isn't a plea for pity. If you've been there, you know that PTSD is an honorable scar. If you haven't, you have no right to offer pity.

The best way you can help is to understand that these men and women have sacrificed their future in defence of the life you enjoy. The gasoline you use to go to the mall, or the golf course, or the mall, has been purchased with their blood, and with the essence of souls.

(For those who might be interested - I'm going to be offering a manuscript evaluation service for fellow authors. Details will follow in a future post, but to summarize - it'll include reading for language, continuity, character consistency, and technical accuracy in my areas of expertise, with free query letter evaluation - the introiductory price will be $1.75/1000 words. Please contact me at tempusfugit02 (at) gmail (dot) com for more details.)