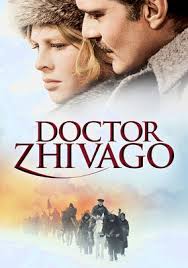 In the 1960s, a generation of young men wanted to be Yuri Zhivago, as played by Omar Sharif in the achingly long film Dr. Zhivago.

Or maybe they just wanted to be Omar Sharif.

One of Hollywood's true epics, Zhivago lurches through the end of the Romanov dynasty in Russia, through Russia's incompetent participation in World War One, and on into the Russian Revolution. The story centers on Yuri Zhivago, a young doctor who is engaged to a irl (I can't remember the character's name, she's so incidental to the story) and then meets the beautiful Lara (played by Julie Christie), the mistress of a rich businessman.

It gets convoluted, but the heart of the story is that Zhivago loses contact with Lara, marries the Girl With No Name, and then meets up with Lara again in Siberia, as they are trying to get out of Russia, seeing as how Communism won't be much fun for anyone.

He ditches his wife, and has an idyllic affair with Lara during the Siberian winter (remember, these are Russians, so for them neck deep snow is balmy).

There is a competitor for Lara's heart - her old boyfriend, now a revolutionary commander. He abandons the revolution to try to find Lara, is caught by his comrades, and executed.

Zhivago and Lara are then forced by circumstance to part ways - and twenty years on he thinks he sees her from the window of a streetcar. He leaps from the moving tram, chases after her, and then drops dead from a heart attack.

Ah, the power and glory of love, unfettered by rigid conventions like marriage! How wonderful, to die in the pursuit of true happiness!

Love is the sweep and flash of the affair, flying free above the mundane prairie of the commonplace, a trysting-ground for the semi-divine who have the audacity to reach out their hands and...

Forgive me. What a load of horseshit.

Zhivago is really a sleazy, tawdry story of two amoral people who can't see any further than their own gonads, and who are dreadfully upset that the world doesn't order itself to suit their romantic desires. It takes its inspiration from Nietzsche's "superman", whose superiority frees him from the bonds of conventional morality, and most particularly religiously-inspired values.

Love isn't everything. While it may be exciting to watch two attractive people prance around in the snow, giving their hearts fully to the chase, the reality is that their mindset can only lead to heartbreak, because, in the end, the chase is everything.

It's like eating without swallowing.
Posted by Andrew at 12:30 AM