Catharsis (Is) For Dummies 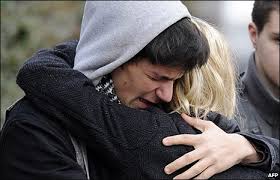 The doctor said that nothing could be done. "All we can do is make you comfortable for as long as possible."

The couple clung to one another, is sorrow and fear, weeping softly...

SCREEEECHHHH! (Sound of needle being dragged across phonograph record.)

Time to end that scene.

I've heard the "can't do any more" line. It sucks, but it's no reason to descend into a mud wallow of bathos. All that does is leach out energy, and God knows I need every bit of energy I can muster.

As U2 say in their song Stuck In A Moment, "these tears are going nowhere, baby". Weeping is cathartic, I know, but catharsis can be, and often is, self-reinforcing. It sets up a cycle of self-pity that can be hard to stop. (After the Viet Nam war, veterans suffering from PTSD were encouraged to "let it all out" in group therapy session. These men, dutifully opening themselves up to catharsis, were more likely to kill themselves later.)

Fighting a serious illness, self-pity is the last thing you need. It's not a "grand tragedy". It's just what you have to deal with, and the best weapon you have for fighting a killing prognosis is a ferociously confident attitude.

Is it unrealistic to say, "I'm not going to allow this to kill me!"?  Not until you're dead, it's not. Far better to be hard, and concede as little as possible. Does it hurt to move? Move anyway. Pain won't kill you.

Vomiting blood? Carry a bag while you're doing yardwork, or puke on the plants. Blood meal's good for them.

And use humor, directed at yourself. Why not? Will you live longer if you dignify a condition that wants you dead with hushed tones and a somber voice? Or are you just paying homage to a stupid "Hallmark Sympathy Card" tradition?

In truth, we are all dying.

(Please don't think for a moment that I'm belittling a spouse's fear and grief. Honor demands that you have to be there for your husband or wife, and if they need to shed tears, if they need to be held, that's your job. But it's also your job to remain in control of your own emotions, and to make a decision for the positive.)

(Upcoming Book - I'm currently working on a new book, KeepThe Vow, about, basically, How To Stay Married Even If It Kills You. I intend to publish it on Kindle, with a price of 99 cents. If you'd like an advance look, please let me know in your comments, with a non-spammable email: name at provider dot com. I'll send you the work in progress, and if you care to write back with suggestions you'll get a heartfelt acknowedgement in the introduction.)
Posted by Andrew at 12:26 AM