No Surrender! (Especially Not To Your Spouse!) 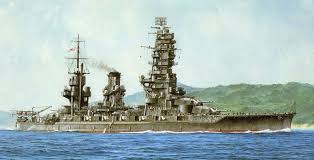 A few days ago, Admiral Yamamoto Isoroku stopped by to offer some marriage advice. Today some of his sailors have volunteered to take up the pen.

I'm just finished an interesting book - "The Battle Of Surigao Strait", by Anthony Tully. It's about the last major ship vs. ship battle in World War Two, off the island of Leyte in the Philippines...and, really, the last big naval battle the world is ever likely to see. What makes it unique is that Tully writes largely from the perspective of the Japanese, using all of the available survivor accounts.

Which number...well, not many. The Japanese lost twp battleships, Fuso and Yamashiro. Each ship carried about 1700 men. Survivors from each numbered ten.

Many hundreds actually survived the sinking, and the American commander, Jesse Oldendorf, sent ships to pick them up. But the Sailors in the water swam away from their rescuers. A few - very few - eventually decided to take the hands that were extended to them. Some were unceremoniously hauled in with boathooks. But most either drowned, or swam ashore to die in the Philippine jungles at the hands of guerrillas.

To the Western mind, this used to be incomprehensible; but it was perfectly natural for the Japanese, steeped in the samurai tradition in which there are no prisoners of war. (I say it used to be incomprehensible, because the recent wars against insurgencies like the Taliban and various groups in Iraq have shown that surrender isn't an option for Americans. It leads to unpleasantries like being skinned alive, and most of the guys - and gals - save the last bullet for themselves.)

But you may be asking, how does this relate to marriage?

Sharing a life with someone leads to countless frictions, on a daily basis, which sometimes flare up into major conflicts (and in retrospect are often caused by the silliest or most trivial things).

Usually we work through them, with harsh words, raised voices, and hurt feelings. Things return to normal within a few hours, or a few days. We often have to eat a bit of humble pie. So does our spouse, but we'll usually tune that out.

But there are some people, and some arguments, which follow a different path. The hot war ends, and one spouse offers the hand of reconciliation, only to have it ignored or slapped away.

Rejected, because some internal standard, usually pride, is seen to have been violated. And the injury festers, with the infection nursed and nurtured into an evil flower.

Because sometimes it feels good to feel bad. We can paint ourselves into a heroic mold, victimized by the uncaring person who should appreciate us more. We can see ourselves as possessed of more sensitivity than Shakespeare's psychiatrist, putting up with hurts that would drive a Baptist to a saloon.

Taken to the extreme, we end up leaving our spouses, perhaps not physically, but in the spirit. We fall in love, and have an affair with...ourselves.

Is anything worth this? Is any hurt to our pride, and real or imagined slight worth taking an axe to the tree in which we're building our life-house?

As yourself, next time you are asked to stoop a little bit, going back through the door into the room where love lives.
Posted by Andrew at 2:16 AM