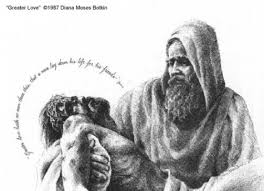 Yamato is an ancient name for Japan. It was also the name of the biggest battleship ever built, which entered service in 1941 and which was sunk by American airplanes in April 1945, while on a hopeless mission to try to disrupt the landings on the island of Okinawa.

Most of Yamato's 3,000-strong crew died with her, but we are fortunate that one man did not. Yosida Mitsuru, a very young ensign, survived, and wrote the short book Requiem For Battleship Yamato. For a couple of dollars you can get a used copy from Amazon. I'm not sure if you can still get a new one.

What Yoshida has left us is not a military history, nor a technical treatise on capital ship design. He has accomplished something far more valuable, and almost unique - a moving and poetic journey into the hearts of men who know that they are fated to die, and who can track the hours of their fading life by the clock.

You see, Yamato's final mission was never thought of as anything but a one-way trip. The Japanese Navy was shattered at this point in the war, and the skies were ruled by America. It would have been a miracle for Yamato to have even reached Okinawa. If she survived the trip, she was to be beached, to act as a steel fortress. There were no plans for her return. Neither was there fuel.

This was to be a sacrifice for Japan, a defense of their homes and families against the feared and hated Americans, who, so the propaganda went, would slaughter the very old and the very young, and take the attractive women as slaves. It was a sacrifice born of patriotism, but at its base born of love.

What goes through the mind of a young man who knows he will be dead soon? In Yoshida's case, simple things - the taste of his final meals, the characteristics of his shipmates, the smell of the sea and the sight of stars. And the sight of his homeland, vanishing astern.

And excitement - would he be up to the task ahead? Would he carry out his duties with honor? And what would come after?

Most Japanese are followers of the Shinto religion. It's a mystery for the Western mind - a mixture of Buddhism and ancestor worship, headed by an Emperor who is divine. However...and this is very significant - most Japanese of Yoshida's generation prayed to God. The afterlife for a soldier or sailor, meant the travel of the soul to the Yasukuni Shrine in Tokyo, a place of eternal fellowship with the souls of those who had gone before, and those who would follow. (It's not like the Norse concept of Valhalla. Attempts to match up Shinto and the Yasukini Shrine with western concepts usually fail, sometimes ludicrously.)

(It's worth noting that Japan did have a small but significant Christian population, the result of French Jesuits who worked bravely in a land in which they were barely tolerated. Ironically, the center of Japanese Christianity was the post city of Hiroshima.)

Yoshida survived, vomited back from the sea by the roiling water attendant to the giant ship's sinking. Most of his shipmates did not. Some by choice - the Admiral commanding the mission locked himself in his cabin, and the navigator lashed himself to the binnacle. Most died in the hell of bomb and torpedo explosions, or fell from gunfire on the decks, or drowned in the steel belly of the beast.

Did God hear their prayers? Did they find release, and peace, and did their souls fly home, like gulls returning from the sea?

Christianity would say, No. Dying unsaved, they were cast away into Hell, there to spend eternity pondering their mistaken faith, and perhaps the accident of fate that saw their birth in a land in which religious choice was virtually nonexistent.

But I wonder. Visitors to the Yasukuni shrine speak of peace, and the feeling that they are never alone, watched by someone from the trees and gardens.

Did their souls get home, to their beloved Japan? I hope so. I hope that in their death, God saw these men walk the walk: "Greater love hath no man, than he who would willingly lay down his life for his friends.) (John 15:13)

After all, "For human beings this is impossible, but for God all things are possible." (Matthew 19:26)