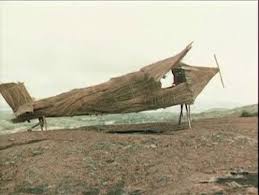 Remember "cargo cults"? They flourished for awhile after World War 2 among some South pacific island natives. Dazzled by the flow of ships and airplanes, trucks and guns and cokes and toilet paper to the war zone, they were horrified when the war ended and it all went away. So they built fake airstrips populated with bamboo airplanes on mountains, hoping to lure back the airplanes that brought their miracles. (Cargo cults still exist.)

Something similar seems to be happening among Christians today. Rather than working to bring Christ to the modern world, they want to bring the world back to Christ's time, seemingly in the hope that he'll come back to it.

Recently I was listening to the radio, and heard a prominent Christian counselor and personality decry the lack of observance of the Lord's Day. He thought that everything should be closed up on Sundays (essential services excepted, of course), and went on to say that the same should be true of Christmas and Easter.

He invited callers, and got a lot of auditory head-nodding. Not surprising. So I decided to call, and add my two cents worth.

"Well, Andrew, you know, the Lord ordained that we have a day devoted to Him, as a day of rest and worship."

"Sure. We all should. Bit in some cases, at least, doesn't that have to be an individual decision?"

"I don't see that. God is quite clear, that it must be Sunday."

"Well, sure, that worked in a day when everyone kept the same calendar. But you want the cops to be out there, protecting you, right?" Setting him up was almost too easy to be fun. But it was still fun.

"We have to make an exception for public safety, sure." He didn't see it coming.

"So you want they men and women who give up their Sundays to brown-bag it? Starbucks is closed, so let them carry a thermos?"

Silence. Then "And our next caller is Jerome from..."

Jesus walked the dusty roads of the Transjordan two thousand years ago, as part of a society whose norms were far more rigid and uniform than are ours.

And even then, He said that the Sabbath was made for us, and to prove His point, He healed a man with a withered hand, because it would have been unkind to make the poor chap wait even a few more hours.

We don't need a bamboo airplane to reach or living Savior. All we need is a living heart.
Posted by Andrew at 1:08 AM