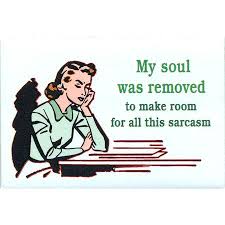 I know a number of people who are proud of their use of sarcasm.

Sarcasm is the mean brother of irony. Where irony points out incongruities in a situation, sarcasm inflates them and then pricks them with a pin to watch the intended target jump - or wince - at the explosion.

And sarcasm always needs a target - or, perhaps more accurately, victim. It's a sneak attack that is at its most effective when it hammers something the victim holds dear. The greater the hurt, the greater the effect.

In the long term, it has a corrosive effect on character, because it seems to be kind of addictive. The more "zingers" a sarcastic person can throw out there, the more he wants to throw. It becomes a part of his habitual speech pattern, and eventually a part of how he looks at the world. The sarcastic person becomes the embodiment of the jaded, world-weary soul, fed up with mankinds excesses.

Too bad it's a pose. There are excesses to oppose, certainly, but taking refuge in this kind of humor does nothing to fight them. It merely makes the speaker look wise and detatched, or so he hopes.

At its heart, sarcasm is also dishonest - the words used gain their impact as their distance from the truth is increased. Which, for those of you who care, put it rather at odds with the Bible, in a formal sense.

In an informal sense, it's on the other side of the river from Jesus. It's not "saying yes when you mean yes, and no when you mean no". And it's not turning the other cheek, or doing unto others as you'd have them do unto you.

Like the old T-shirt slogan from the 60s said..."Do unto others, then split".

That may be the best advice for dealing with a sarcastic person.