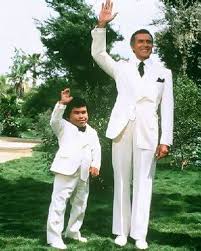 When I lived in California, I was struck by how many people were writing off Christianity in favor of Buddhism, Taoism, and various New Age beliefs.

It was both puzzling and disheartening to see, but the reasons were pretty straightforward, and may be useful as a warning to Christians, a cautionary tale as to how Christianity is seen by "everyone else".

That was a hint. "Everyone else."

Increasingly, and with the rise of the evangelical movement, Christianity is seen as standing for exclusivity. "We're saved - they're not." The implication that is assumed - not always correctly - is that "we're better".

If the culture of the United States holds one thing dear, it's the concept of fairness, the level playing field. Decades of legislation has tried to make equal access a guiding principle. It's an outgrowth of the English enshrinement of honorable behavior and fair play..."it's not cricket, old chap" is not just a tag line from spoofs of Masterpiece Theatre. It's a very real value, and one that we, thankfully, inherited.

And increasingly, Christianity is seen as "unfair", because only the "elect" are going to Heaven. The people who say that the loudest consider themselves among the elect, which really doesn't help.

And so many people turn to religions that are seen as more tolerant, more open. They see Heaven as a place populated by folks of all beliefs, under the care of a God who loves all equally.

A far cry from the God who will condemn unbelievers to the everlasting fire.

It would all be fine, if the transcendent world operated like chain stores. You can shop at Wal Mart or Target...different experiences, to be sure, but you get the same stuff.

The doctrinaire Christian, however, does not believe this is the way it works. You don't get the same stuff. You get Heaven...or hell.

And you drive people away with the seeming unfairness of it all.

Maybe the solution is to return to "witnessing" on a very personal level. Instead of telling people that hell awaits if they don't believe, tell them that peace, joy, and love can be found in the teachings of a Jewish carpenter.

It's not as fun as standing on a streetcorner and yelling about hellfire and brimstone.

But maybe we should take a hint...the streetcorner harangue is something Jesus didn't do.