How To Be A Vulcan 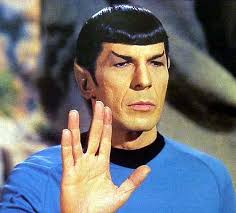 You don't have to be a Trekkie to realize the immense influence that Star Trek, in all of its variants, has had on our society.

Most of these are benign, and some have been quite beneficial. Many young people looked at the optimistic world of the 23rd century, said "I want that", and embarked on careers in science, engineering, and medicine.

One of the defining symbols of this cultural icon is the redoubtable Mr. Spock, half human and half Vulcan. His coolly logical approach to life and its problems has fascinated us for nearly fifty years. Would that we could have the composure and the inner strength and peace that seem to be a hallmark of the Vulcan race!

But the nice thing is that you, too, can take on the attributes of a Vulcan. And it's not what you think.
And that's enough for now. Taking on the attributes of Mr. Spock don't mean that you purge every emotion from your heart...quite the contrary. You embrace them, but you keep them in your heart. Instead of giving the world a boiling kettle of your likes and dislikes, sudden enthusiasms and quick boredom, you give a gift of the calm center that you have - yes, you DO - that touches God.