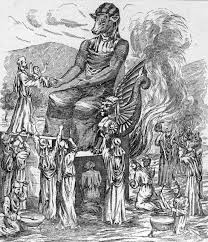 Ad for a book seen recently - "Learn the secrets of effective prayer! Read this book, and be assured that God will hear and respond to your prayers!"

Oh, Lordy, I hope not. That would be the worst news I think we could ever get.

Everyone, even the most committed atheists, would love for their pryaers to be heard. But if you could really learn how to pray effectively, to make sure God heard you, it would mean one thing:

That we have a "little g god". It would reduce got to the status of a favor-dispensing genie, an idol whom we have only to approach with the correct incantations to get what we want.

Every heathen's dream - a clockwork god that works! We found the secret, the key! Quick, sacrifice some more virgins to keep it happy!

Modern Christianity, in the Americas in the early 21st century, already approaches that. We use quite a bit of mumbo-jumbo, without really knowing what we're doing.

Take "speaking in tongues". Even though I don't hold with it myself, I can accept that some people have their own "prayer language". All well and good, but when a preacher begins using his prayer language from the pulpit, it gets scary. Not because it sounds like gibberish...well, yes, because it does sound like gibberish, and it's being used in exactly the same way that a witch doctor might chant to the crocodile god. It's not scary because I think "bad things may happen"; it's scary because people actually think that this is the way to reach God.

Another bit of mumbo-jumbo is the use of language consistent with that used in the King James Bible. No one would deny its beauty and spare elegance; likewise, no one would use this language in a business meeting. It's only used in church.

When it's used in the church of Jesus Christ, it goes directly against what Jesus said - "Say what you mean". If speaking plainly is what Our Savor told us to do, why are we using language that we would never use in public, and over which we don't have full control?

If you're thinking, hey, English is English...I have control over that, here's a simple test. If this sentence correct?

"I lift my eyes unto the hills, from whence cometh Thy help."

If you said yes, you're in the vast majority, and you're also quite wrong. "Whence" means "from where". The "where" is redundant.

I believe that we have a God who wants us to talk to him, and who has gone to some pretty great lengths - including letting His own Son go through some painful experiences - to get our attention.

He tore the veil.