Genocide Is Where You Find It 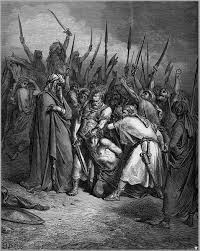 Over the past few years I've butted heads with several people (pastors included) in several churches over the appropriateness of using Saul's incomplete eradication of the Amalakytes as a demonstration of the consequences of disobedience to God.

(For those who may not remember, the prophet Samuel told Saul that he was to kill all of the Amalakytes, and their livestock. Saul spared the best of the animals, as well as King Agag and his queen. Samuel was not pleased, and killed Agag himself. Saul lost his kingdom, and 500 years later Agag's descendant Haman tried to wipe out the Jews living in exile in Persia.)

This is a difficult story on many levels, because, baldly, it's divinely-ordained genocide. The Amalakytes are to be wiped out - completely. No survivors. This is completely at odds with our modern sensibilities; a president who would have deliberately targeted Osama bin Laden's entire family would have found himself on the receiving end of a lot of criticism, not to mention possible legal sanctions.

But if you look at it in an historical context, the picture's a bit different. Bronze-Age war was unimaginably brutal, and genocide was considered a valid aim.

The heart of the problem with teaching this story is that we are not living in the Bronze Age; indeed, most people would be hard-pressed to identify what the Bronze Age was, let alone its time frame or characteristics.

We therefore have almost no idea of what the order Samuel passed on to Saul actually meant. It's easy to sit in a comfortable auditorium-style seat and nod while the preacher says that Saul was rightly punished for disobedience.

But what you're nodding about is the killing of a large number of captives, men, women, and children. They will likely have been tied with ropes so they can't escape or fight back.

They will be "put to the sword". Clean words that describe a messy death. Messy, and painful. Two methods were typically used - decapitation, and stabbing under the ribs.

Decapitation, done properly, is quick and probably as merciful as any killing with a blade can be. However, given a limited number of executioners and a large number of "customers", fatigue would make the stroke less powerful and exact as time went on, leading to incomplete decapitation. I leave the horror of this to your imagination.

Stabbing, or "running through", puts the blade through several large organs, major blood vessels, and the nerve bundle called the solar plexus. It's incredibly painful, and death comes through bleeding out. It's quick, if the aorta is severed, but nowhere near quick enough.

This is difficult enough, but consider those who are waiting, bound, to be killed. Consider what they see, hear, and smell.

Do you see the problem? Nodding in satisfied agreement recognizes none of the realities of the operation. Put it this way - could you have done this, as one of Saul's soldiers? Certainly not the "you" sitting in church...at least, I hope not.

The end of Saul's reign, as the price of disobedience, is a story that simply can't be taught. We don't have the slightest means to understand the actions that are at its heart.

And for that we should be grateful.

(I've heard a lot of justification for the extermination of the Alamakytes...from the chilling "they were like a cancer" to the somewhat goofy "the Holy Spirit was only in the world part-time", whatever that may have meant. An apologist on the Internet wrote that being killed by the sword was actually a "good death", which is hogwash. Another suggestion was that this is a morality tale, and never actually happened. Whatever. Probably the most logical argument, providing justification and admitting historicity, is that this is the way wars were fought at the time. Deal with it.)
Posted by Andrew at 12:30 AM