The Future Of Friendship 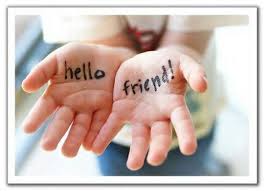 One of the most interesting things about Facebook is that it's made it harder to know the people with whom we choose to stay in touch.

A thousand years ago we communicated by letters and telephone calls...and phone calls outside our area code cost money. Keeping up a relationship to a commitment of resources, both time and treasure.

The result was, in many cases, a gratifying honesty. You could hear joy or tension in a voice, see handwriting that sloped up in enthusiasm, or trailed of in despair.

Facebook, on the other hand...well, a few years back Norman Vincent Peale (he of The Power Of Positive Thinking) suggested that we should live as if all that we do will be placed on a billboard the very next day.

Facebook's done this, except that we have control of what goes up on that billboard. It's not a reflection of what we are, but of what we want to look like.

It's a fashion statement.

And it's ultimately impersonal, leaving the word "friend" hanging sadly, a forgotten flag hung from a deserted porch.

The saving grace of the whole thing is that there are a few people who eschew the canned posts that can be copied from other websites, and who write from the heart.

Their statements are sometimes awkward and ungrammatical, but in comparison to the smooth "postcards" that infest the site, they crackle with a raw energy that says, I'm real. I have dreams, I have hopes.

And I give hope for the future of friendship.
Posted by Andrew at 11:40 PM