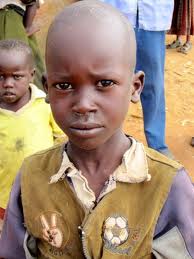 There's an old joke that the first words spoken by a child born in Jersey City are..."Someone please adopt me!"

I'm from North Jersey, so I can say that!

Adoption is something that a lot of people look at as a last resort - if they can't have children, or if the chance of genetic damage is so great that it would be a perceived cruelty to give birth.

And that's a shame, because there is a crying need for more adoptive parents. Not for white infants in the USA, but for children whose luck has gone seriously down the tubes, and who face a childhood in an orphanage...with an uncertain future after they're discharged. All too often, they 'graduate' to a short and unhappy life of abuse, ranging from prostitution to impressed military service to grinding poverty in ghastly conditions, doing menial work.

There's a waiting list for white babies. For an African five-year-old, adoption is a miracle. For a Haitian ten-year-old, it's virtually beyond hope.

Why? The fact is that white people like white kids, and everyone wants a baby. It's assumed that it's easier to raise a baby, and this is true. Babies don't have much emotional baggage. Usually.

But the kids who need parents, who need that second chance, usually don't get it. And here, it's maybe time for adoption to become a conscious choice - a choice taken in place of having one's own child.

There are plenty of reasons why couples want kids of their own...


There's nothing intrinsically wrong with any of these lines of thinking, except that it's a zero-sum game. There are only so many homes to go around, and the total number of orphans in Sub-Saharan Africa alone is greater than the total number of children in Denmark, Ireland, Norway, Canada and Sweden combined. Over one million.