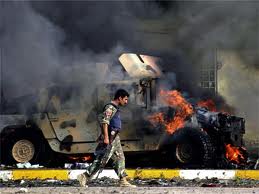 Memory. That summer dusk, years ago.

God sends us trials, to make us more Christ-like.

This was the thesis of a TV preacher's talk this evening. He's a man whom I respect, so I listened.

His point was that God allows trials, or sends them, to make us into the kind of people that will be able to move closer to Him, in this life and the next. It's up to us to accept them as part of God's plan, and in that acceptance gain the blessing that God has for us, just on the other side of the storm.

It all sounded great, and put into a logical context the difficulties we face in life. But then I remembered the little blond girl, on the night that will never end.

Come to think of it, I'm not entirely sure she was a girl. The damage was too great to be certain.

But she was conscious.

And in that memory came the realization that what that man on the television was obscene.

What was this child going to learn from a wall of overpressure and flame, driving gravel and glass into her skin - and her eyes? How was this going to make her anything - except dead, and agonizingly so?

To say that God allowed this to happen is an affront. To even insinuate that he sent it, is insane.

The God that I met through Jesus Christ is the one who set up a world to operate under the control of Man - and he hates how it turned out. It didn't have to be this way, but we made it this way.

He can stop it any time He wants...but then we lose the opportunity to grow into the 'adults' He longs to see. If He takes away our free will, even the will to make Paradise into a killing field, He condemns us to an Eternity lived as infants.

Meanwhile, He's a combat medic. He can't stop the bullets, but He can be at your side to give you the ultimate comfort that even in the worst moment, Someone is willing to go through Hell to reach you.

I know the preacher meant well. he was working from Paul's 'count it all joy'. But Paul was a man who knew what he was doing when he stood in defiance of the Jewish and Roman authorities.

He wasn't a little girl for whom the door to Hell literally opened, one mild summer evening.
Posted by Andrew at 10:58 PM