How To Be Remembered 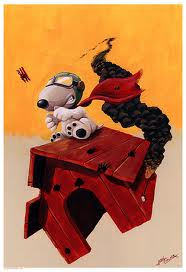 Quick, what did you think of? Probably Snoopy's nemesis. Or perhaps pizza. Or, if you've been truly unlucky in your moviegoing, a perfectly dreadful film that was released in 2008, a kind of "All Quiet On The Western Front" meets "The Bridges Of Madison County".

But here's the thing...you thought of something.

Manfred von Richthofen, the minor Prussian aristocrat who became famous for flying all-red airplanes during the First World War, was an interesting, and rather appealing individual. He was a skilled fighter pilot, yes.

He was a killer, yes. he shot down eighty British and French airplanes, in a day when parachutes were not worn.

But he was also a teacher, who was intensely concerned that the men under his command learned enough to stay alive in the dangerous skies over France. he was a writer - his book, "The Red Air Fighter" was completed, and read by even his enemies before his death in April 1918. It's a minor classic.

But most of all, Manfred von Richthofen was a human being. To read his autobiography is to travel with a man who first enjoyed air combat, loved the thrill of the chase. But as his score mounted, he became uncomfortably aware of the human toll he was taking.

He died in combat at the age of twenty-five, and was honored by his erstwhile enemies.

Manfred von Richthofen would have gone the way of all warriors...he would have faded away, except for one thing. A beagle with delusions of grandeur.

Snoopy needed a comic foil, and Charles Schultz could not have asked for a better one. 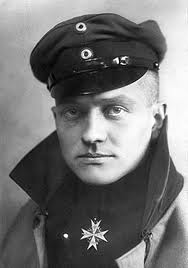 And, perhaps, Manfred von Richthofen could not have asked for a more assured place in our cultural memory.
Posted by Andrew at 11:37 PM