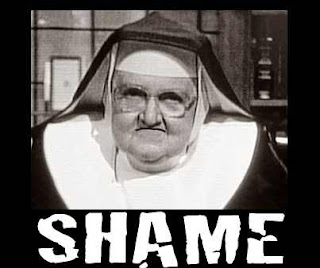 As a writer, not talking about sex with any specificity one of the rules that I refuse to break. It's not a matter of prudery, or a religious cast that says that all sex is somehow tainted with sin.

Rather, it's a matter of privacy. My characters have to become 'real people' to me, and hopefully to you, for the duration of the book  There are some parts of my life that I would rather not have open to general examination, and I'll bet parts of yours, too - not because they're 'bad' or 'wrong', but because they're private. There is that sometimes subtle line that says, this is privileged.

And, personally, I figure that if I want these characters to be people who live on in your memory as true personalities, long after the book's back on the shelf and finished, I have to let them have their areas of privileged information.

Andrew Greeley, one of my favorite writers, takes a very different view, and made a name for himself by being 'the priest who writes explicitly about sex'. In truth, he's not a whole lot more explicit than the Song of Songs, but I find the 'sex scenes' in his novels to be the least convincing, and the least 'necessary'. They tend to slow down the development of the plot, and don't add a whole lot to character development. I mean, we know the characters aren't asexual. Point made, and we don't need to see an owner's manual, with examples, for their relationship.

Outside the writing world, most conversations about sex tend to fall into the locker-room variety. I've heard my fill, and these included 'sober' descriptions from men who thought they were being thoughtfully analytical. At heart, though, there always seemed to be some aspect of personal ego involved, with a concurrent degree of exaggeration and embellishment. The descriptions always ended up reinforcing some stereotype, and after hearing enough I began to let my mind go somewhere else. Anywhere else.(I'm told that women have their own variety of locker-room talk, but I've never heard it, and suspect that I might prefer not to!)

Obviously, there are appropriate forums (fora?) for conversations on this subject...between spouses, in therapy, and on Dr. Phil's show.

Joking? No, I wasn't. I've seen men furtively listen to talk shows that described certain sexual problems, and nodding to themselves...and one hopes that this could lead to clarity in their relationship. (And no, I don't believe that 'conversations between friends' about your relationships can serve the same purpose, because ego will get in the way.)

But...heck, I might be very wrong, and totally out of synch with the world today. Maybe sexual transparency is the psychological Sara Wrap that has resulted in the preservation of many marriages. I've been called 'one of the finest minds of the eighteenth century'...did I just prove it?
Posted by Andrew at 12:14 AM