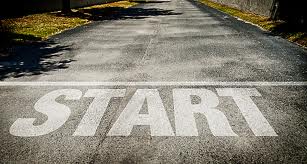 Some projects - like writing a book - seem so big that it's like standing at the foot of Everest in your tennis shoes, carrying a daypack..

"I'm really not ready for this."

So it's tempting to down tools and think, well, I'll start tomorrow. Those tomorrows have a way of multiplying, though, and pretty soon you'll be looking back across a calendar-sea, marked with days where you did anything else.

Starting is hard. Be it writing a book, making a garden in that bit of rocky waste-ground behind the garage, or cleaning the kitchen, the job looks daunting enough that it drowns any incentive to even look for a place to start.

The cliche is that any big job is like eating an elephant. You do it one mouthful at a time. But who wants to eat and elephant? Aside from being cute, it's probably illegal, because they're endangered. Scratch one incentive-builder.

But there are some ways to at least begin. They don't guarantee completion, and they may not work for everyone, but for what it's worth...


There's a saying that well begun is half done. It's speaking to attitude. That's the one thing you alone control.