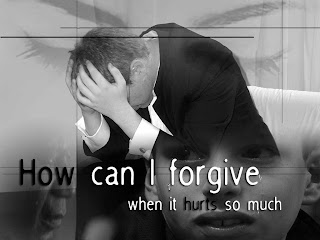 Forgive, so that you'll be forgiven.

Forgive your enemies. Pray for them. Love them.

Jesus sure didn't make things easy for us, did He? It's one thing to go to church and raise your hands in worship, and talk in scriptural tags. It's one thing to forgive the neighbor whose dog keeps digging up your roses.

It's quite another to forgive the person, or people, who willfully strike out against you, or your loved ones, and who destroy lives and years.

It's inhuman to forgive a killer, or a molester. It's an abrogation of our duties to what we hold dear, to send a message that even these acts can be forgiven.

Well, yes, it is inhuman. It's Divine. And far from being a slap in the face to our values and our honor, it's the hardest way to uphold them. Sometimes dying would be easier.

Not just because Jesus said so, though that alone is a pretty compelling argument. It's necessary because the quality of our mercy defines the quality of our society - it makes our world a worthwhile place in which to live. And it's the only way to build a world in which God has a place.

I'm not talking about original sin, or how God forgives a fallen world. It's simply that a Divine love which has created - and still loves - such an imperfect vessel as Man can only be welcome in a society that holds Man's life as dear as he does, because in the end, that is what forgiveness is all about.

The lack of forgiveness is the desire for vengeance, at the first level, through emotional retaliation. That's usually as far as it goes, but it's enough - since that level of vengeance is enough to deny humanity to those we won't forgive. And thus, to create a two-tier system, of the Loved and the Not Loved.

How can God take part in that?

That's exactly right. We HAVE to be okay with what they did, for the purpose of letting it go as a raindrop falls into the ocean and is lost forever.

All we have to do is to let it go, and let go the desire to see them hurt in return.

What Would Jesus Do?