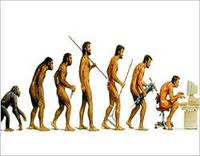 That seems to pass a lot of people by, on both sides of the 'creation versus evolution' divide.

A theory is something that attempts to explain observed physical phenomena using an allowable methodology - that is, a methodology which does not violate any known physical laws. Like, say, gravity. It's a theory as long as it can't be proved using the litmus tests of physical rigor (accuracy, i.e., not breaking known laws) and repeatability (which means that any competent and similarly equipped researcher can duplicate the results.

Meanwhile, to stay admissible, the theory has to continue to explain what we see.

Explain what we see. That's the key, because every scientific law we have is, in the end, a model explaining why we see what we see.

Take gravity. The equations drawn up by Sir Issac Newton four hundred years ago do a good job in explaining how fast a dropped rock will fall, or how far you can throw a baseball. The Newtonian equations we do a great job in explaining the way the world works.

Sorry, The way it works as we see it. If you go to the relativistic domain, at speeds approaching the speed of light, Newtonian mechanics breaks down. Badly. Consider this...

You're on a train that is going within 0.1 meters per second of the speed of light. This is perfectly possible; there is no known reason we can't go this fast. It just burns a lot of gas.

It's not, because no object can go faster than light, according to the Theory of Relativity, developed by Albert Einstein. Relativity explains how things work at relativistic speeds, and 'normal' speeds, quite well. (So how fast is the ball going? Just under the speed of light, but it would take a bit of math to explain why.)

But...is Relativity true? Of course not. It's the Theory of Relativity, and science likes it because, yes, it explains what we see. (We still use Newton because it's good enough to explain what we see in the everyday world, and a lot easier to use than Relativity. But it's still fundamentally wrong.)

And Relativity is, at best, incomplete, because it doesn't cover electrical and magnetic forces. basically, it covers gravity. To pull in the other major physical forces, you'd need something called a Unified Field Theory, upon which Einstein was working at his death. (Oh, and it would have to explain ' strong' and 'weak' nuclear forces, as well...)

So, what of Evolution? Certainly it explains some things, but there are other things it may not explain so well. But the biggest issue is that it's a way to explain the world. It isn't how the world works.