And things get worse...a LOT worse. New pain, new physical and mental insult (the kind that calls for Depends, and depend is the FMF word)...but the battle continues.

I have to confess that I have something of a secret weapon...someone whose example I have always admired, Lieutenant Onoda Hiroo (in Japanese, family names come first; Hiroo is his given name.) 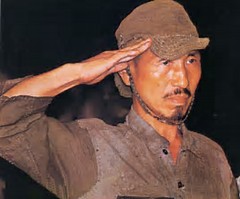 The name may ring a bell. Onoda Hiroo was the last Japanese holdout of World War Two, surrendering only in early 1975.

Lt. Onoda commanded a 4-man intelligence unit on the island of lubang in the Philippines, and not believing the war was over, fought on. He didn't just hide; he fought.

For twenty-nine years. (You can read his story here; it's more vivid than Wikipedia, and the language used may be colourful, but I think you may agree it's appropriate.)

Lt. Onoda, was told by many, many people that his war was over, but he didn't believe them. So he fought on.

Why? There's only one word that fits. Honour.

An that's how I feel. I am told my war is done, that it's time to go into hospital and be drugged to end the pain, to give up on the dreams that have sustained me and the hopes that have pulled me forward. Like Lt. Onoda, I've been told that this is for the good of a wier world, one that does not want to see the fight grind on.

Better to be a holdout, and fight on.

And, if you want to know, this is how I fight:
I ay be quite wrong. Like Lt. Onoda, I may be fighting a war long lost. But like him, I don't believe that, and I will not stop.

I you'd like to read Lt.Onoda's story in his own words, get a copy of No Surrender. It's a great and inspiring read. One to deserve a permanent place on the bedside table.

And yes, this is a post for Five Minute Friday.


Musical accompaniment is from Sugar Ray, with Someday.


I do ask that you be patient with my slow replies to your comments (which we treasure). I'm trying to stay caught up.


I have another blog, "Starting The Day With Grace". The focus is a grace quote from someone you might not expect (like, say Mick Jagger) and a short commentary. I hope you'll join me.