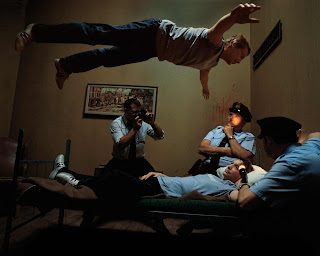 And that's where I was this afternoon, after a second one of our dogs died. On Boxing Day, we lost Tulip, a fairly ancient Pit mix, who alternated between ferocious and clownish, and who once helped me through malarial chills by lying on top of me to keep me war,

This afternoon Trevor, our deerhound, died. Tulip's death had been expected; Trevor began to feel a bit off on Christmas Eve, shook off what seemed to be an allergic episode, and then suddenly fell into a coma last night. He died without regaining consciousness. He was somewhere between ten and twelve, by our estimate. (It's probable that he had a heart attack with atypical symptoms.)

He turned up one day in 2005, standing outside Tulip's run. Tulip got our attention by barking, and then kept Trev from running off until we could get there by inviting him to play at the fence. They kept up a good relationship from that point forward.

My wife thinks that Tulip didn't want to make the Long Journey alone; I tend to agree with her. Or perhaps Trev simply died of a broken heart.

Not the holiday week we'd expected.

But a holiday is just a date, if that's all we can think of. The whole point behind belief in God - from a Christian viewpoint, or any viewpoint, is that the sorrows we face are a transitory thing, and that somewhere beyond this "grey rain curtain" is a "new green country, under a swift sunrise". (Thanks, Gandalf!)

The world into which we're born will break our heart, if we let it,

So don't let it. Think, instead, on the beauty and love that we experience, and the notion that these things are a part of the Creator, and that they're not destroyed - as He is not destroyed.

Think of the thousands of anecdotal experiences of life after death, of encounters with angels, and of Heaven...and realize that if only one of those is true, the whole package is true.

As I dug Trevor's grave, I found comfort in that.

Necessary and sufficient comfort.
Posted by Andrew at 12:15 AM