Once In Royal David's City 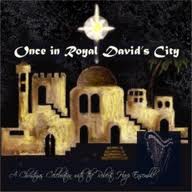 If you had visited Bethlehem in the 1960 or 70s, you would have found a poor but charming town, largely Christian but welcoming of all faiths, and acutely conscious as the origin for the most momentous Life in history.

If you had visited in the 80s or 90s, you would have found a poor but charming town, and (SNAP!)...oh, yes, that was a bullet, but he's not a very good shot...what was I saying? Yes, put on the body armor, by all means...yes, this is the origin for the most momentous Life in history.

Today, if you visit Bethlehem, you will visit a town ruled by Hamas, which gained political power in Israel through armed conflict with the Fatah organization (whose members you would also not be likely to invite to your Sunday brunch). Hamas has used suicide bombing and indiscriminate rocket attacks to get its point across, and avows that the Holocaust didn't happen (but gleefully says that if they have anything to say about things, it will!).

There is now a wall around Bethlehem. Perhaps it's a good thing.

Often you'll hear people saying how good things were in the past, how the moral values of the young have really gone downhill, how their music's too loud (I mean, they listen to that Michael Buble guy!), and how their hair is too...something.

But when you look at Bethlehem, you can't really avoid that the problem isn't with the young. It's with us.

It's we of 1970s and 80s voting age who elected leaders who have allowed organizations like Hamas to flourish. We grew up under the shadow of Viet Nam, and under the 'care' of Benjamin Spock. Those chickens have come home to roost, with a vengeance.

We elected leaders who looked attractive, who had good punch lines but whose moral compass was seriously adrift.

We didn't keep up with the news, thinking you couldn't tell the players without a scorecard.

Having the right to elect the leadership of the most powerful nation on Earth, we had the obligation to find the scorecard, and learn how to use it.

Instead we watched while our country emasculated itself, morally and then practically, in the cause of Globalism.

And remember, when you decide not to visit Bethlehem, that you helped build that wall.

(A disclaimer...I do feel that the Israelis and Palestinians have to learn to live in peace, and that the majority of Jews and Palestinians would love to just be able to live on the same block, and tune out the rhetoric. I'm as opposed to Hamas as I would be to a revitalized Stern Gang or Irgun rising within Israel. Enough bullets have gone downrange.)
Posted by Andrew at 12:35 AM