And God Rolled His Eyes... 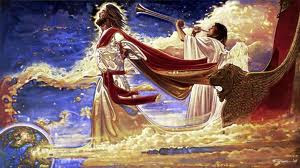 Recently a TV preacher made the breathless announcement that gold melts at 1948 degrees Fahrenheit, and that the Jews got their own state in 1948 after the "refiner's fire" of the Holocaust, and that anyone who is into prophecy should pay attention.

The object, of course, is to "prove" the imminence of the Second Coming.

This is embarrassing. To start with, there are a number of ways to measure temperature...the Fahrenheit scale is only one of them, and one that's not particularly useful except out of habit.

Second, to imply that there was anything positive about the Holocaust is a few miles past insulting. It takes a multitude of individual human tragedies - the catastrophes that destroyed six million individual lives - and lumps them together into a tool that can be used to prove a point.

Third, Jesus Himself said that God alone knew the hour of Jesus' return. That implies that any attempts to "decode" the Bible or current events to predict it are simply inappropriate. The Return is God's business. Until it happens, our business is the Great Commission.

After all, what are we going to do - get our tickets early so we'll get a good seat?

This is the sort of thing that makes Christians laughingstocks in society. That's not too harsh a word. A lot of people find Christianity somewhat hokey, because of exactly this sort of thing.

It's not that our faith is something that's only dead serious. It's not that we can't wonder about what's happening, and is it really the beginning of the End. It isn't even that we can't try to identify predicted events as they seem to happen.

But it is our responsibility to treat God with the respect He deserves. And that means not second-guessing Him, assuming He's turned the Bible into a Word-Search, or that He's planted clues like Easter Eggs, so that we really could predict an event He's made unpredictable.

And it's our responsibility not to embarrass Him. Even though He loves us anyway.
Posted by Andrew at 12:30 AM