Pearl Harbor And Your Marriage 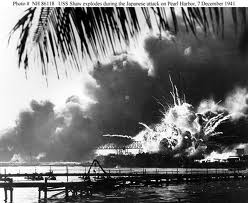 Today is the 71st anniversary of the Japanese attack on Pearl Harbor. A tactical victory for Japan, it launched that island nation into a war that saw its cities burned to ash, and in two cases, radioactive slag...all within less than four years.

The main touchstone for the raid was the fact that it was delivered without a formal declaration of war - a 'sneak attack'. That alone (and it was unintended on the Japanese side) raised the level of righteous anger in the United States to a flood. Admiral Yamamoto Isoruku, the reluctant architect of the plan, remarked the "all we have done is awaken a sleeping giant, and fill him with a terrible resolve".

Prescient words, and within seventeen months Yamamoto himself was dead.

It's interesting that the 'sneak attack' label has lasted through the decades, with such negative coloration.

Because it's often exactly what we do to our spouses.

Consider the following scenario...your husband or wife is away at work, or playing golf, or shopping, and you find something, or think of something, that's either an error of omission or comission.

Maybe the garbage wasn't taken out, or the fish fed...or maybe it's a receipt you found for a new $300 putter.

And you wait for the sound of the car in the driveway, rehearsing in your mind what you're going to say.

The guilty party comes through the door, with a greeting. And you wait for the right moment, when your statement will have the maximum impact.

And then you let them have it, when their guard is down and you're most likely to win your point.

All couples fight like this, at some point in their marriage. And even if the point's a valid one, the end result will be bitterness, and mistrust.

What to do, instead? The solution's blessedly simple, if we choose to use it.

"Honey, do you have a minute? There's something I'd like to talk to you about."

It's fair warning, and a soft transition into a situation that has to be resolved.

Because marriage is not a conflict that has to be won.
Posted by Andrew at 12:30 AM