Pain is a subject I find myself revisiting, because it keeps getting worse...and finding new ways to strike, keeping me off-balance. (And this is my offering for Five Minute Friday, written ahead of time, by necessity.)

It can be hard to deal with; a cliff that can't be climbed, or perhaps a precipice above an abyss.

There are some good resources out there, that offer genuine help. C.S. Lewis wrote The Problem Of Pain, a theological look at why pain has been allowed to enter our world...and he does not shrink from considering the pain that animals suffer, not dismissing that question with "well, they're just dumb animals." A masterful book.

Kara Tippetts offers some insight into the pain that medication can incur in a good cause, here. Reading kara's words from 'beyond' always make me tear up. How I wish I might have met her!

And then there's me; I'm not a learned evaluator of literature and theology like Clives Staples lewis, and I don't have Kara's ability to connect the mundane with the transcendent (hence, I guess the title of her blog, Mundane Faithfulness).

So I have to try to figure this out with a head that has occasionally been used as a hammer (not kidding; I used to use the back of my head to drive in wooden wedges when truing up concrete formwork).

So many of you have prayed that I get freedom from pain, and recently, I realized that it's happened. It just needs an extra comma.

On January 6, 1941, Franklin Roosevelt gave a State Of The Union speech in which he articulated four basic human rights, to shine as a beacon in a world stumbling toward global war. These 'four freedoms' were later immortalized by Norman Rockwell in a quartet of paintings. 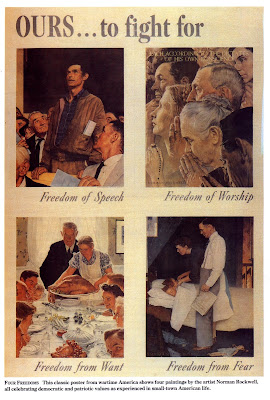 So I guess this is a good place to begin, about how pain has set me free.

Going clockwise from the upper left in the picture, let's start with Freedom Of Speech.

I can tlk about anything now; it took a long time, but I've come to realize that talking about incontience and someof the other issues that come with terminal illness doesn't take away my dignity. It's tempting to stretch it and say that the willingness to talk actually enhances dignity, but that's ego and let's not go there. Just saying I'm free, now...that's enough.

And I'm free not to speak. Talking is hard and painful and tiring, and I weigh what I'm thinking of saying, these days. And there is o much that can be left unsaid! So many words were spent to erase I quiet that I had feared, but now, instead of erasing, I embrace the silence.

Freedom Of Worship...well, God's certainly become a larger part of my life...the dominant part, actually. But that's not what this means. The freedom I have gained is the ability to drop both tradition and legalism, and to relate to God in a Scripturally true sense. And not 'all of Scripture'; I don't have time toreconcile the Old and New testaments. God loves me, He came to Earth to live as a man and be killed to pay my sin-debt...and when I accept that, it's all I need to know.

And I'm not afraid, so pain has given me Freedom From Fear. I'll hold this distinct from not fearing death, because that's implicit in Freedom Of Worship. Rather, the things I might have feared...more pain, more humiliation, more loss of independence...require too much imagination to consider. It simply hurts too much to live in the future. Pain pegs me to the moment, and I need not consider what's coming. Dealing with what's here is enough.

And finally, the most liberating of all...Freedom From Want. I'll have to confess that I'm going to be creative...instead of reading 'want' as 'lack' (as the speech and painting define it), I'm choosing to say...I don't want stuff.

I was pretty materialistic for long periods of my life. I wanted a Ferrari (sat in one, once), and cool firearms (did that), and a lot of messing about with aeroplanes (got someof that). I also wanted 9and, yeah, still do) a tank. Now I live where I can drive one, and the neighbours will be if not pleased, at least tolerantly amazed.

On the whole, though, I have what I need. I don't need to spend energy wanting. I can just enjoy what's here. and let the rest of it go.

Except the tank. Still want that. An M18 Hellcat tank destroyer, to be precise...WW2's fasted thing on treads.

Illness has narrowed my life, so I have little and need less...but pain has broadened my heart.

What I want. most of all, is to feel compassion for those who lack the things I may take for granted...a roof over my head, good food, clean water, and love.

Having that compassion, I am rich beyond measure. There's no want here. 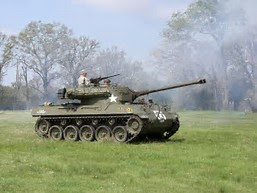 I'm tempted to use "Tanks For The Memories" as the musical theme, but that's really too awful a pun.
So how about WHAM!, with Freedom? It's a fun, engaging video, filmed when WHAM! was the first Western pop group to perform in China. I hope you'll like it.

I do ask that you be patient with my slow replies to your comments (which we treasure). I'm trying to stay caught up.