Facing pain and more pain, and deterioration unto death, one might be the slightest bit tempted to say, "This is unfair! I had a LIFE!"

Tempting, but for the eample of someone you probably never heard of, Bruno Peter Gaido.

On February 1, 1942, peter Gaido was an Aviation Machinist's Mate 3rd Class (AMM3/C), serving on the aircraft carrier Enterprise. On that day Enterprise had struck the Japanese-held Marshall Islands, and as she retired came under attack from a group of Japanese bombers led by Lt. Nakai Kazuo.

Gaido saw the attack developing, and ran to an SBD Dauntless dive-bomber parked on Enterprise's deck. He climbed into the rear cockpit, and unshipped the .30 caliber machine gun mounted there, and began firing.

It became a personal duel; Gaido crippled Nakai's aeroplane, but the Japanese bomber continued on in attempt to become a proto-kamikaze, and crash aboard the carrier. It hit the ship a glancing blow, and its wing sheared off the tail of the SBD from which Gaido was firing.

After the impact Gaido stood in his seat, and continued fire into the bomber's wreckage...and then picked up a fire bottle to help extinguish the flames that billowed up around him.

And then he disappeared into the bowels of the ship, afraid that he would get in trouble for ghis unconventional actions.

He didn't. Admiral William Halsey gave him a spot promotion to AMM1/C, a big jump for an enlisted man.

You'd think the fates would have been kind to Peter Gaido. You would be wrong.

Four months later, flying from the Enterprise with pilot Ensign Frank O' Flaherty, Gaido was part of the strike that sank the Japanese carrier Kaga (one of the carriers that attacked Pearl Harbour) at the Battle of Midway, on June 4, 1942.

Their SBD damaged and losing fuel, O'Flaherty and Gaido had to land in the water near the Japanese fleet. They were picked up by the destroyer Makigumo, and were tortured into revealing some information about the composition of the American fleet.

And then they were tied together, and thrown into the sea to drown.

When I think life's unfair, I think of Bruno Peter Gaido and Frank O'Flaherty. 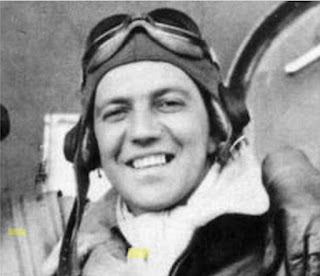 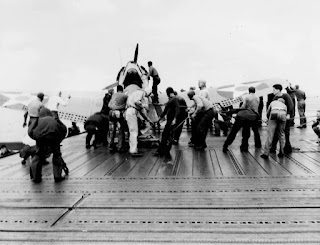 The musical theme can be nothing else but this:


I do ask that you be patient with my replies to your comments (which we treasure). I'm trying to stay caught up.